‘Grand theft’ of valuable items at All Hallows College in Dublin

Gardaí investigate missing items worth ‘quite a few million’ 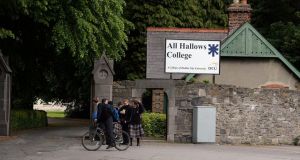 All Hallows College, Dublin: valuer and expert in rare books Owen Felix O’Neill claimed last night the loss to the college amounted to “quite a few million.” Photograph: Cyril Byrne

Gardaí have been called in at All Hallows College, Dublin following the discovery that several very valuable items have gone missing.

Fr Patrick McDevitt, president of the College, told The Irish Times the gardaí were called in some weeks ago when it was discovered “a sizeable number” of items were missing. He said their value was estimated “in the thousands”.

However, valuer and expert in rare books Owen Felix O’Neill claimed last night the loss to the college amounted to “quite a few million.”

He met two staff members of All Hallows College when they attended a valuation event last February at the Hibernian Club on Dublin’s St Stephen’s Green hosted by Sheppard’s Irish Auction House.

They showed him a book from the college library for valuation. It turned out to be a rare medieval Book of Hours from about 1460, believed to have belonged to Philip the Good, Duke of Burgundy.

Mr O’Neill told them the book was very valuable and they invited him to visit the college to assess and value other books and items there.

After detailed investigation of items at the college he concluded it had been “plundered for a very, very long time, with millions worth of art” missing.

This, he felt, had continued until quite recently. Over 100 books were missing in what he termed “a grand theft”, which was “unspeakable”. ‘Hen’s teeth’ Some of the books were “as rare as hen’s teeth”, he said.

The items included prints by Raphael, 37 engravings by 18th century Italian artist Giovanni Battista Piranesi which featured views of Rome as well as a first edition, in two volumes, of a book by Isaac Newton.

Missing, too, is a book dated 1484 on St John Chrysostom’s Sermon on Penitence as well as an undated script sent to Fr Joseph Leonard by playwright George Bernard Shaw and all of Fr Leonard’s correspondence with Shaw.

Missing as well is correspondence between Fr Leonard and Lady Lavery, as well as books sent to Fr Leonard by Jackie Kennedy, each of which had been signed by her.

In Mr O’Neill’s view, whoever removed the items knew exactly what they were taking in terms of value.

Last Friday he announced that All Hallows College was to wind down its operations after 172 years. Earlier last week it withdrew from auction letters sent by Jackie Kennedy to Fr Leonard, who had lived at All Hallows until his death in 1964.

‘Wiggle room’ Fr McDevitt told The Irish Times that selling the Jackie Kennedy letters would have bought All Hallows College “a little wiggle room” but wouldn’t have prevented closure.

There are 450 students enrolled on its degree programmes, with another 500 in continuing education courses. It has a staff about 100, including those teaching part-time.