Funeral of ‘woman of extraordinary courage’

She was ‘my Mom, my first love, my hero, my best friend’, says son Conor 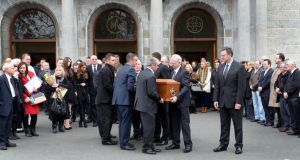 He was there, he said, “to honour her courage”, recalling “the darkness she broke open with the light of her own experience”.

On arrival at the church, her remains were received by Archbishop of Dublin Diarmuid Martin, president of Blackrock College Fr Cormac Ó Brolcháin and parish administrator Fr Tony Coote.

In his homily Fr Coote said she had been “a tiny voice amid the clamour of denial and denunciation”, who came to represent “the power of one against many ”. He recalled how people did tell their stories “but no one believed” them. “Perhaps belief is her greatest legacy.” She “gave everythinig she had. It is a powerful way to live.”

He concluded with Late Fragment , a short poem by Raymond Carver:

And did you get what

you wanted from this life, even so?

And what did you want?

To call myself beloved, to feel myself

beloved on the earth.

In a tribute, Ms Buckley’s sister Cynthia Emienike said: “ Behind her tenacity and her public pursuit of justice was a humble, loving, compassionate, caring and faithful” woman.


Party
At the end of the Mass, Conor Buckley said his mother had wanted a party not a funeral. He wondered how he could “do justice to the scale of what she had achieved in her lifetime ”.

The Aislinn centre in Dublin was “her pride and joy. She is looking down from heaven today happy to see so many of you here.” She was “my Mom, my first love, my hero, my best friend . . . My family and I adored her.”

He paid tribute to the Martin family, “who gave her hope, belief and love” as a girl and had wanted to adopt her.

Darragh Buckley remembered coming home from school one day where he was getting a hard time over his “crazy Afro” hair, and he said to her “why can’t we be like everyone else” and she replied “.... because you are special.”

Her remains were carried from the church by members of her family to the strains of Bill Withers’ Lean on Me.