‘Crops have been destroyed, which will lead to serious food shortages in the months ahead’ 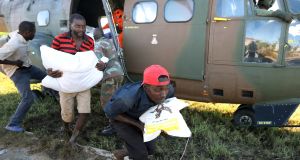 Fresh fundraising appeals have been made to provide relief to hundreds of thousands people in Southern Africa who are suffering in the aftermath of Cyclone Idai.

Chair of the Catholic Church’s overseas development agency Trócaire, Bishop Wiliam Crean, has has called for support for its Lenten campaign in order to provide assistance to those affected.

“The scenes of devastation in southern Africa following Cyclone Idai are frightening in their impact. Our hearts go out to the millions who have lost loved ones, homes or livelihoods as a result of this terrible disaster,” he said.

“We pray for the people of Mozambique, Malawi and Zimbabwe. ”

Trócaire was responding to the crisis in all three countries, he said. “The immediate needs are huge, but the long-term implications of this disaster are very worrying. Crops have been destroyed, which will lead to serious food shortages in the months ahead,” he said.

The Church of Ireland Bishops’ Appeal has announced that it is is releasing €10,000 in emergency funds to support relief efforts in Mozambique, Malawi and Zimbabwe in the wake of the cyclone.

A spokesman said in a statement that further funds would be added in the coming weeks and the Bishops’ Appeal welcomed support from parishes and individuals who wished to contribute.

“The devastation has resulted in over one million people being affected, with more than 100,000 people displaced from their homes. Immediate concerns include access to hygiene kits, shelter, safe drinking water, and food. There are also major concerns about the spread of waterborne diseases,” the spokesman said.

Lydia Monds, education adviser for Bishops’ Appeal pointed out that “in Mozambique, Malawi and Zimbabwe, people are now bracing themselves for outbreaks of waterborne diseases”.

Plan International, an international charity which fights for the rights of children, particularly girls, who live in the poorest regions of the world, has also scaled up its response to Cyclone Idai. It has “warmly welcomed” the Irish Government’s support of over €1 million in funding in response to the Cyclone.

It pointed out that “some 1.7 million people are said to be affected across southern Africa. In Malawi, close to a million people have been affected - nearly half are children”.

Plan International’s Gerald Magashi, who is in Beira- the most severely affected city in Mozambique, said the situation there “is dire. It looks like all the houses have been wiped out. There’s no power, there’s no fuel, even communication is really difficult. There are no roofs on houses, they have been blown away. People are sleeping outside”.

The organisation is concerned about the potential for malaria and waterborne diseases to spread due to the flooding, which would put people, especially the most vulnerable like young children, at risk.