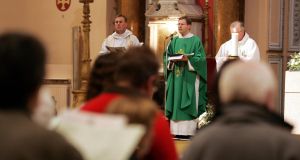 Pope Francis has appointed Dublin priest as the new Bishop of the Catholic diocese of Cork and Ross.

Fr Fintan Gavin (53), Chancellor of the Dublin Archdiocese, concelebrated a Mass marking the announcement in the Cathedral of St Mary & St Anne in Cork City with the papal nuncio Archbishop Jude Okolo and the retiring Bishop of Cork & Ross John Buckley as well as priests of the diocese.

Fr Gavin was born in Dublin on New Year’s Day 1966 and baptised at St Andrews Church on Westland Row. The second eldest of seven brothers and sisters his his family roots are in Marino on Dublin’s northside.

He was ordained by Auxiliary Bishop of Dublin Éamonn Walsh in June 1991 and appointed to the St Vincent de Paul Parish Church in Marino. Following extensive experience as a schools’ chaplain in the Dublin archdiocese, as well as service in the UK and US, he studied in Rome and secured a doctorate in canon law at the Gregorian University there in 2003.

That year also he was appointed Vice- Chancellor of the Dublin Archdiocese. In 2017 he became Chancellor. He also taught canon law at the Milltown Institute of Theology and Philosophy in Dublin and has been a guest lecturer at St Patrick’s College, Maynooth.

Fluent in Italian and Spanish he had been chaplain to the Italian speaking community in Dublin. As music director with the Gospel Choir in Our Lady of Victories Parish, Ballymun Road, Dublin, he led them during Pope Francis’ meeting with engaged and newly married couples at the Pro Cathedral last August.

The diocese of Cork & Ross, one of the most important in Ireland, includes Cork city and part of Co Cork. It has a Catholic population of 220,000, in 68 parishes, with St Finbarr and St Fachtna its patron saints.