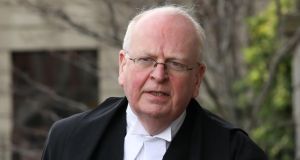 Michael McDowell: ‘No church is entitled to say to the Irish State: ‘Our law is superior to your law.’’ Photograph: Collins Courts

The State “effectively signed a blank cheque” in agreeing the controversial 2002 indemnity deal with 18 religious congregations, the then attorney general Michael McDowell has said.

Under the deal the congregations paid €128 million in return for a State indemnity against all future actions by people who, as children, had been in institutions run by them. Compensation so far has cost the State more than €1.4 billion.

In a new RTÉ documentary, Rome v Republic, to be broadcast next week, Mr McDowell says he and senior ministers were kept out of the negotiations.

In the same documentary former president Mary McAleese recalls how senior clerics in Rome had said to her that “the devil works through children” abused by priests. It was “a preposterous thing to say,” she comments.

Presented by Mr McDowell, and tracing the history of the Catholic Church in Ireland from the late 18th century to the present, Rome v Republic will air next Thursday.

Describing the deal agreed during the “dying days” of the 2002 Fianna Fáil-Progressive Democrats administration, Mr McDowell said then minister for education Michael Woods effectively capped the liability of the religious orders.

“The simple fact of the matter is that the result was that the State effectively signed a blank cheque which cost us €1.4 billion in the end, in exchange for a promise of a contribution of €128 million from the religious orders,” he says.

In October 2001, Dr Woods announced the setting up of the redress board to compensate people who had been in the institutions.

Lengthy and difficult negotiations took place with the 18 congregations that had run the orphanages, reformatories and industrial schools concerned, concluding in January 2002 with the € 128 million indemnity offer.

The church “wilfully turned its back on the laws of the land” when faced with the child sex abuse scandal, preferring “to use its own secretive canon law precepts instead”.

“This was something I discovered during my own time in government,” Mr McDowell says, adding: “No church is entitled to say to the Irish State: ‘Our law is superior to your law.’” He will appear on tonight’s Late Late Show.

In the documentary, Mr McDowell recalls how he lost confidence in the authority of the Catholic Church in 1968 after the publication of the Humanae Vitae encyclical which copperfastened the church’s ban on artificial contraception. He was a pupil at Gonzaga Jesuit College at the time and well informed on religious matters.

Mr McDowell remembers learning of it at a FCA training camp in Duncannon in Co Wexford. He heard the news while “queuing at a chipper, on a transistor radio. That day in my mind the whole authority of the Catholic Church disappeared in an instant.”

Meanwhile, former President Mary McAleese says the then Vatican secretary of state Angelo Sodano was attempting in 2003 to secure an agreement with Ireland that it would not access church documents.

During a State visit by her to Italy, he raised the matter of reaching a concordat with Ireland. “I asked him why and it was very clear it was because he wanted to protect Vatican and diocesan archives. I have to say that I immediately said the conversation had to stop,” Ms McAleese says.

Dr Woods, who retired from politics in 2011, has frequently defended the 2002 deal, saying it was the best that could be done, since the majority of abuse cases were not the responsibility of the State alone.

“That was the right decision for the people of Ireland . . . here were people dying who were quite elderly and they had had a very bad time,” said Mr Woods, in a 2011 interview.

So far, the 18 religious congregations who ran the orphanages, reformatories and industrial schools have yet to fully fulfil the terms of the 2002 indemnity deal and of later offers they made to the State.

Of the €128 million they agreed to pay at the time, €4.21 million (3 per cent) is still outstanding. Negotiations over the handover of remaining properties is continuing.

More significantly, following publication of the Ryan report in May 2009, all 18 congregations were called in by the government of the day and asked to increase their contributions to redress costs.

It followed a recommendation by Mr Justice Seán Ryan in his report that the congregations pay half the costs of redress, with the taxpayer paying the rest.

Combined, the congregations offered a further €352.61 million, of which €103.17 has been paid over (in cash and property), or 29 per cent. Negotiations are continuing over the transfer of ownership of nine properties.

The redress scheme has cost the taxpayer €1.5 billion with 15,579 people, who had been in institutions managed by the 18 congregations as children, receiving awards which averaged €62,250 each.