Clerical concern over access to Easter Sunday services in Dublin

No private traffic allowed inside outer ring between 6am and 8pm 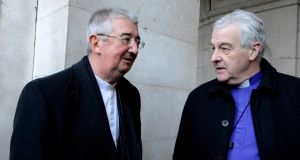 Archbishop Diarmuid Martin and Dr Michael Jackson, Church of Ireland Archbishop of Dublin, are concerned about access to churches on Easter Sunday. Photograph: The Irish Times

Church of Ireland clergy, including Archbishop Michael Jackson, are to meet in Dublin on Friday to discuss ways to address difficulties in accessing city centre churches for Easter Sunday as a result of the the 1916 centenary parade.

No private traffic will be allowed inside the city’s outer ring – stretching north and south between the two canals and east and west between Ringsend and South Circular Road – between 6am and 8pm on Easter Sunday, March 27th.

The restrictions will complicate access to services at St Ann’s on Dawson Street and and St Stephen’s on Mount Street, St George and St Thomas on Cathal Brugha Street as well as to the two cathedrals – Christ Church and St Patrick’s.

One Church of Ireland minister said: “They never consider the churches, either at Easter or on St Patrick’s Day. The superintendent at Kevin Street may assure us that we will be able to cross the cordon, or the route of the parade, but when the time comes the gardaí on duty will not allow it.”

A spokeswoman for the archbishop said the archdiocese had “been in contact with the organisers . . . to try and improve the level of access to the Pro Cathedral. That’s ongoing."