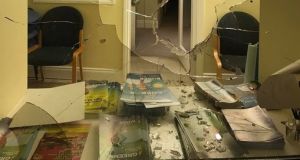 Fine Gael Senator Colm Burke has said he will not be deterred by the actions of people who threw a brick through the window of his constituency office in Cork North Central. “No candidate or their staff should have to face this, but my campaign and I won’t be intimidated or deterred,” said Mr Burke, who confirmed that some 250 of his election posters have also been removed in the past five days.

Mr Burke, who is bidding to retain Fine Gael’s seat held by retiring Dara Murphy, said he learned of the incident at his office in the centre of Blackpool on Sunday when a local business person contacted him to inform him that his office window had been smashed.

“There were two panes of glass broken in my office which is in the old Post Office by the bridge – I’ve been there since August when I moved from my constituency office in Shandon Street because I needed more space.

“The windows was blown in with a brick and there were also stones used so there were two panes of glass broken and the brick was thrown with force because it bounced off a wall and knocked a piece out of the wall as well.”

Mr Burke confirmed that he spoke to gardaí about the incident and a garda technical expert had photographed the damage.

Garda sources confirmed to The Irish Times that CCTV footage from the area indicated the damage may have been caused by two juveniles engaged in anti-social behaviour.

Bricks fired through the window in my office in Blackpool this evening. It has been a difficult few days with over 250 posters taken down and illegally removed.

No candidate or their staff should have to face this, but my campaign and I won’t be intimidated or deterred. pic.twitter.com/CfhEiZq6CB

Meanwhile, Mr Burke has also reported to gardaí that up to a quarter of the posters that he has put up in the election campaign have been removed from poles in Cork city.

“The posters have disappeared from all over the northside of the city – it’s only in the city, I’m not aware of any being removed in the county part of the constituency which runs out to within two miles of Mallow,” said Mr Burke.

“They started disappearing within 12 hours of when we started putting them up last Wednesday – we were wondering why posters weren’t appearing but they were being put up but were just disappearing again.”

In Co Sligo, Fine Gael election candidate Thomas Walsh has had some of his posters torn down.

Mr Walsh, a Sligo county councillor in the Drumcliff electoral area, is standing in the Sligo-Leitrim constituency with running mate Senator Frank Feighan.

About 40 of his posters and billboards were sprayed with yellow paint between Taylor’s Cross and Ballyfarnon in the county.

The incident happened between 10pm and midnight on Saturday night. It is being investigated by gardaí in Ballymote who are studying CCTV footage taken in the area.

Cllr Walsh said he did not know who was responsible for defacing his posters, but he would continue to run a positive campaign.

“There could be a variety of reasons for it, but I’ve been told that there was a number of candidates in the local area with another of posters torn down also.

“This isn’t what democracy is about and postering is part of the democratic process, but it won’t deter my campaign.

“In terms of the need for postering, it’s very much needed when you are a new candidate and a first time candidate. If you don’t poster, you don’t have the same profile as outgoing TDs.”