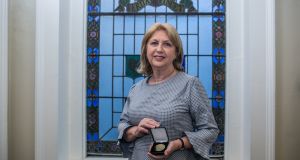 Former president of Ireland Mary McAleese: ‘Even people whose knowledge of the Catholic Church is negligible are aware of its views on abortion.’ File photograph: The Irish Times

“These are not rare or exceptional cases. There are tens of millions of them every year. They die by clinical abortion, spontaneous miscarriage, still-birth or from fatal conditions which cause them to die in utero or soon after birth. The vast majority are unbaptised,” she said in an article for the current edition of the Tablet weekly.

The church teaches that “baptism wipes away all prior sin and even though the unborn child and the born infant are incapable of sin the Church teaches that, thanks to the sin of Adam, everyone is born ‘with a fallen human nature and tainted by original sin’,” she added.

The church taught that a person “who dies in a state of original sin ‘receives his eternal retribution . . . at the very moment of his death, in a particular judgement that refers his life . . . to everlasting damnation.’ In other words they go to hell,” she said.

The former president added that since this seemed glaringly harsh in the case of blameless babies, and caused untold additional grief to bereaved parents, theologians as recently as 2007 had concluded that there were “grounds for hope” the unbaptised among the unborn and among infants may go to heaven.

“The Catholic Church is known worldwide as a staunch defender of the right to life of the unborn. Its leaders regularly lock horns with governments and pro-choice advocates, challenging the liberalisation of abortion laws and condemning Catholic politicians who fail to defend Church teaching.

“Even people whose knowledge of the Catholic Church is negligible are aware of its views on abortion. They dominate contemporary Church-State discourse, even making their way into a strident warning from the US bishops to the new Catholic President of the United States Joe Biden on the day of his inauguration,” she said.

“Bishops,” she added, “are never more comfortable than when they are preaching to the world from the moral high ground of a Church which believes itself to have been missioned by God. The Church’s mission is the salvation of souls and salvation is fundamentally about life after death.”