‘There’s no proper oversight or scrutiny... this legislation could lead to a slippery slope’ 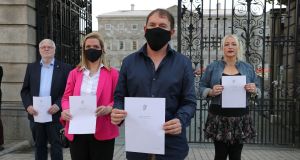 Planned legislation before the Oireachtas which seeks to legalise assisted dying in Ireland is “deeply flawed” and leaves the population open to “significant risk”, consultants in palliative medicine have warned.

Last October, the Dáil voted to pass the Dying with Dignity Bill to committee stage by 81 to 71 votes after the three Government parties allowed a free vote on the legislation.

However, experts working in end-of-life care have expressed concern about the wording of the Bill, tabled by People Before Profit TD Gino Kenny.

Dr Sarah McLean, consultant in palliative medicine at St Vincent’s Private Hospital and Blackrock Clinic, says the Bill is “deeply flawed” and lacks adequate safeguards. Without these protections, society’s most vulnerable risk being pressurised into seeking assisted suicide, she says.

The Bill’s definition of what constitutes a terminal illness is too broad, adds Dr McLean, a member of the Irish Palliative Medicine Consultants’ Association (IPMCA). “There’s no proper oversight or scrutiny.”

IPMCA chair Dr Feargal Twomey, a consultant in palliative medicine at Milford Hospice in Limerick, says “every clause” in the proposed legislation has “significant weaknesses” and that the Bill “is poorly constructed and leaves the population open to significant risk”.

“The Bill, as it stands, is very open to significant misuse and abuse and encompasses any person in Ireland who has any chronic condition,” says Dr Twomey, who is also the Royal College of Physicians Ireland (RCPI) spokesperson on physician-assisted dying and euthanasia.

The RCPI’s 2017 position paper on assisted suicide, which was updated in October of last year, states “the potential harms of assisted suicide outweigh the arguments in favour of legislation for assisted suicide” and contends that a “majority” of healthcare professionals and bodies worldwide support this view.

Dr Twomey says the wider Irish medical profession hasn’t been consulted in developing the legislation. He also noted that 88 per cent of palliative care doctors recently surveyed by the IPMCA did not support the legislation.

The Irish Hospice Foundation (IHF), which advocates for better end-of-life care, does not hold a position on assisted dying, but its chief executive, Sharon Foley, says the debate so far “feels quite rushed”.

She says: “The pace has been surprising, in that it has gone straight into second-stage legislation.”

Based on international figures, where the numbers of people availing of assisted dying ranges from 0.5 per cent (Oregon, US) to 4.2 per cent (The Netherlands), the IHF has calculated that somewhere between 180 and 1,500 people in Ireland per year could avail of assisted dying schemes by 2031.

“At that scale, we certainly deserve to have a very robust, thorough debate to underpin whatever we put in place, and we have to make sure we’ve considered all angles and all safeguards, and all building blocks are in place before we move to something like assisted dying,” Ms Foley says.

“That would be the concern of the Irish Hospice Foundation – that those building blocks have not been put in place.”

In other countries where similar debates are taking place, such as Finland, New Zealand and Canada, she says “they really sift through the evidence, they talk to the experts, they talk to people, they consider it from an ethical and a philosophical perspective. They have taken their time with that debate”.

Consultant psychiatrist Dr Siobhán McHale says the legislation’s definition for what constitutes a terminal illness is “far too broad” and could relate to chronic conditions many people will suffer from later in life.

The proposed legislation’s name – Dying with Dignity – is also “misleading” and “inaccurately stigmatises doctors’ work with patients”, says Dr McHale. The term suicide should also be used when discussing the Bill, she adds. “This is suicide, it’s the voluntary ending of a life when the perception is there is no other alternative.”

Dr McHale, who works with patients suffering from chronic conditions and terminal illnesses, says patients often fear loss of control at the end of their life.

“We know patients can have a view that they need to end their lives. But the vast majority change their minds as they process the shock and fear. What we do is help them to find alternative strategies to address their suffering meaningfully.”

The Government should focus on increasing support for people with serious mental health issues rather than legislating to allow people to end their lives as a solution to these challenges, says Dr McHale. Greater resources are also needed in palliative care services, she adds.

Assisted dying is a “complex issue and, while some individuals have spoken very powerfully about it and have an important perspective, the other 80 per cent of perspectives are not being heard.” she says.

Dr Regina McQuillan, a palliative care consultant at Beaumont Hospital and St Francis Hospice in Dublin, says the role of family members in the assisted suicide process must also be addressed. The role family play at the end of person’s life can be “very complex” and, despite meaning well, loved ones may not fully understand the wants or needs of the patient, she says.

“Families sometimes perceive the person is suffering and they want that suffering to end. But they are also suffering as a family and there is this idea that once the death happens they can get on with life. In Ireland there’s a very strong tradition of families being involved in care, which can be incredibly helpful, but sometimes family wishes aren’t the same as what the patient wants.”

The Bill was passed in the Dáil after a public campaign supported by, among others, CervicalCheck campaigner Vicky Phelan, who has a terminal cancer diagnosis. A motion by Minister for Justice Helen McEntee to establish a special Oireachtas committee to consider the issue and report back in 12 months’ time was defeated.

The Oireachtas Committee on Justice invited submissions on the Bill, with a deadline of the end of end of January. One of those to respond was the Irish Human Rights and Equality Commission, which said the Bill needed “significant changes” and did not ensure “adequate safeguards” to protect a person’s right to life.

Research carried out by the IHF in 2016 identified a fear of pain and fear of being a burden as major concerns among Irish people.

Ms Foley says the fear of pain aspect “tells us people are concerned they’re not going to have equitable access to palliative care and proper services on end of life.

“Two areas of the country still have no access to a hospice in-patient unit.”

Better funding of home care packages could help ensure “nobody is making a decision based on fear of being a burden”.

Any assisted dying scheme must ensure “that it’s a self-request, that it’s voluntary, that there are good review mechanisms in place” and that it is not being influenced by “fears around pain, or being a burden, or financial fears. The Bill that’s there at the moment is fairly sparse on detail,” Ms Foley says.

For example, the Bill provides for the establishment of a review committee, but the committee can only review decisions already made; in some cases, that may be too late.

“These are all things that need to be considered in advance... I’m not sure we’ve really uncovered the issues for very vulnerable, frail, people. I’m not sure we’ve quite solved and got those building blocks in place – or even heard from them as to what they want themselves.”