Catholic priests from Romania being recruited to serve in Ireland

‘Vocations are very good there, with a surplus of priests,’ says bishop 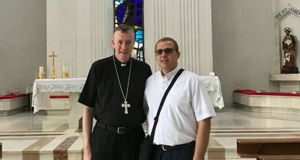 Bishop Denis Nulty with Fr Eugen Dragos in Romania. On his arrival in Ireland, Fr Eugen Dragos will spend time in Carlow, becoming acquainted with Irish life before appointment as curate to the Tinryland parish

An Irish bishop has resorted to going to Romania to recruit priests for his diocese. While the number of priests is dwindling in Ireland, there is a surplus of priests there.

Bishop of Kildare and Leighlin Denis Nulty visited the east Romanian diocese of Iasi “to explore how we might support projects out there in exchange for priests coming to minister in our diocese”.

An immediate result is that the first Romanian priest will arrive to Kildare and Leighlin on August 29th, he said, adding that he hoped a second Romanian priest would come to work in the diocese over the coming months.

Speaking to The Irish Times, Bishop Nulty recalled how a relationship between the Irish Catholic Church and its Romanian counterpart had grown through the Irish College in Rome where some Romanian seminarians had also been sponsored by dioceses in Ireland.

With a Catholic population of almost 900,000 in Romania, just 5 per cent of the total population, the church there is strong and “vocations are very good there, with a surplus of priests”, Bishop Nulty said.

On his arrival in Ireland next week, Fr Eugen Dragos (28) will first spend time in Carlow, becoming acquainted with Irish life before appointment as curate to the parish of Tinryland in the county.

Bishop Nulty has no doubt the people of Tinryland will support him wholeheartedly in this pilot-project. “In the coming months, my hope is that a second Romanian priest will come to work in the diocese. He will also live in the presbytery at Tinryland.”