Tusla says it cannot investigate all of its adoption records 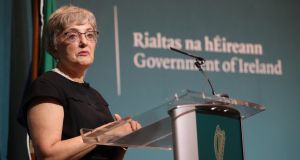 Tusla, the child and family agency, has 70,000 adoption records and does not have the “remit or capacity” to investigate them, its chief executive has said.

Fred McBride told The Irish Times that Tusla was “not an investigative body” and it was not its “role” to carry out an audit of all adoption records now in its possession.

“We can only hold the records and our only legal remit is to give identification and tracing information to individuals to whom records refer. If there was to be a full audit, it would have to be done by some outside body. I am sure we would assist them, but it is not our role to investigate adoption records,” he said.

Mr McBride’s intervention comes amid calls for an audit of all adoption records dating back to the foundation of the State.

However, a spokesman for Minister for Children Katherine Zappone responded that it was always understood the process now planned was a two-phase exercise.

The first would be a scoping exercise involving a sample of files which would be carried out by Tusla.

The second phase would be a full audit involving all the files and all the agencies. “The Minister has been clear that a full review of files would require additional resources,” the spokesman said.

This would allow the full review to be conducted by an outside agency, or specialists in this area.

This new trawl follows the announcement by Ms Zappone on Tuesday that 126 births were incorrectly registered by St Patrick’s Guild adoption society between 1946 and 1969.

Outlying her first course of action, Ms Zappone said: “We must first judge the likely incidence of cases that can actually be identified, and the scale of them. Then we can judge the next step.”

Concerns about irregularities in the St Patrick’s Guild records were first flagged with the department in July 2017.

A number of groups working with survivors of mother and baby homes say there is now a “complete breakdown of trust” between them and Ms Zappone, whom they accuse of “sitting on these files” and “doing nothing for two years” despite their repeated calls for a full investigation into adoption practices since the 1920s.

The 126 incorrectly registered births were “just the tip of the iceberg”, said Clodagh Malone of Beyond Adoption, while Paul Redmond of the Coalition of Mother and Baby Home Survivors claimed that Ms Zappone had not done anything to come closer to the truth, as those affected got older and some began to die.

“She does not deserve the kudos she is now getting for revealing the 126 incorrect registrations. We have been telling her this for years. This is very difficult for us,” he said.

Mr McBride said “some discussions” were now under way between Tusla and the Department of Children about a “sampling examination” of records from other adoption societies. Asked whether Tusla would investigate all 70,000 adoption records now in its possession, a spokeswoman said: “No, this is not within our remit.”