Zappone hopes Adoption Bill will pass by end of year 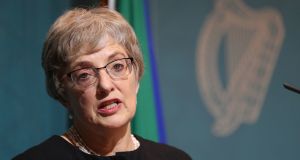 Minister for Children Katherine Zappone: ‘The Bill places the information and tracing service on a statutory footing for the first time.’ Photograph: Niall Carson/PA Wire

Legislation that would allow adoptees secure information about their adoptions should pass through the Oireachtas by the end of the year if there is co-operation across the Dáil and Seanad, Minister for Children Katherine Zappone has said.

The Government has denied that the Adoption (Information and Tracing) Bill has been stalled, and Ms Zappone said her department would now engage with TDs and Senators to speed up its passage.

The Minister was speaking during statements in the Seanad last night on incorrect birth registrations.

It came a day after Ms Zappone revealed that up to 126 people whose births were incorrectly registered are to learn that their parents are not their birth parents.

The incorrect registrations were uncovered in an analysis of the records of the St Patrick’s Guild adoption society and apply to people who had had their adoptive parents incorrectly registered as their birth parents on their birth certificates between 1946 and 1969.

Tusla, the Child and Family Agency, has allocated a social worker to each of the 126 cases. Its first task is to identify individuals involved and establish their addresses.

A helpline established following the disclosure had, as of yesterday afternoon, responded to 85 calls.

On foot of the controversy, Taoiseach Leo Varadkar and Ms Zappone were questioned about the passage of the Adoption (Information and Tracing) Bill. The Bill aims to provide an adopted person a statutory right to their birth certificate and information about their adoption order, even if this was years ago.

Ms Zappone put forward similar arguments and said the “main thing” was that she wanted to “get this right”. The Bill was published in 2016 and has passed second stage in the Seanad and is awaiting committee stage.

“As we are all well aware, following our second stage debate, the Bill seeks to balance competing rights to identity and privacy, and getting the balance right is proving challenging,” Ms Zappone said.

“The Bill places the information and tracing service on a statutory footing for the first time.

“The Bill is of relevance to persons the subject of incorrect registrations as well as to adopted persons. My intention is that, with your support, the Bill will be enacted by the end of the year.”

In weighing up competing rights, Ms Zappone said: “We can’t enact something that is perceived by the Attorney General to be unconstitutional.”

People Before Profit TD Richard Boyd Barrett said he was “adopted by St Patrick’s Guild in the years affected”. While he said he was probably not personally affected, he said he and thousands of others had serious questions.

“The Adoption Rights Alliance and the Coalition of Mother and Baby Home Survivors are furious about this and they say this has been known for 20 years but that nothing was done about it. People spoke about it while in Opposition but later came into Government and did absolutely nothing about it.”