‘Many of us grew up in a generation where the image of Christianity was one more of being judgemental, than of being merciful’ 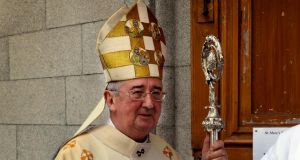 The image of a punitive, judgemental God must be turned head over heels, the Catholic Archbishop of Dublin Diarmuid Martin has said. Photograph: David Sleator/The Irish Times

The image of a punitive, judgemental God must be turned head over heels, the Catholic Archbishop of Dublin Diarmuid Martin has said.

“Many of us grew up in a generation where the image of Christianity was one more of being judgemental, than of being merciful. Mercy was reduced to a sort of lucky escape from the consequences of hard judgement, hardly the essence of the Christian life,” he said.

“The concept of biblical mercy can only be understood if we turn our image of a punitive God head-over-heels,” he said.

The Archbishop, who will represent the Irish Catholic Church at an extraordinary synod of bishops in Rome next month, pointedly, quoted with approval Cardinal Walter Kaspar who has been criticised by five conservative cardinals for suggesting church rules on marriage might be relaxed.

Archbishop Martin recalled how “Pope Francis said of a recent book by Cardinal Walter Kasper on the theme of mercy that: ‘this book has done me such good’. Not a bad recommendation for a book! The key to the understanding of the book is the subtitle: Mercy: the essence of the Gospel and the key to the Christian life.”

The problem was, the Archbishop continued, “that if we are trapped into an image of God whose justice is primarily punitive, we will never see mercy as essential to the Christian concept. Mercy will, to use the words of Cardinal Kasper, become “a concept often to be downgraded, degenerating in to soft spirituality or vague pastoral concern, lacking clear definition and shaped somehow to suit each individual.”

He noted the challenge posed by Pope Frances for the synod next month “is to be open to ways of applying the primacy of mercy to particular situations while remaining faithful to fundamental truth.”

Last weekend it emerged that Cardinal Gerhard Müller, prefect of the Congregation for the Doctrine of the Faith, Cardinal Raymond Burke, prefect of the Supreme Court of the Apostolic Signature, Cardinal George Pell, prefect of the Vatican Secretariat for the Economy, as well as two other retired Vatican cardinals have contributed to books to be published on Wednesday next which oppose outright any change in current church laws on marriage.

Archbishop Martin was speaking today at a Mass in St Mary’s Haddington Road to mark the feast of Our Lady of Mercy and the 20th anniversary of the Mercy International Centre on Baggot St.