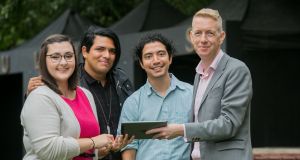 Gay members of the Catholic Church have been urged to tell their stories of how they have been damaged by official church teaching on sexuality, ahead of a world synod on young people in Rome in October.

A coalition of more than 100 LGBT groups in more than 60 countries has established the Equal Future 2018 campaign and website to allow young people, and others hurt by the church’s position, to send a message to their local synod delegates.

Synod 2018 on “Young People, the Faith and Vocational Discernment” takes place from October 3rd to 28th in Rome.

At a press conference near the RDS in Dublin, where the World Meeting of Families is taking place this week, young LGBT people told of their struggles growing up as both gay and Catholic.

The speakers also included journalist Ursula Halligan, who said her decision to come out as gay three years ago ahead of the marriage referendum had been “the single most important thing I have ever done”.

Emily Dever, who identifies as bisexual and pansexual, and who comes from a traditional Catholic family in the US, said she was “blessed” that her parents were so supportive of her trans sister and of her.

Carlos Velazquez, who grew up in Venezuela in a strongly Catholic community, eventually left and moved to Ireland because of his LGBT identity. The meeting also heard from Xorje Olivares originally from Mexico but now living in New York.

There was also an audio message from Eros Shaw (a pseudonym), a gay Catholic Chinese activist who has written a book about the lives of LGBT people in China.

Equal Future spokesman Tiernan Brady said the campaign was about “allowing people to see and understand the real damage we do to young people and children when they grow up thinking that to be LGBT would be a disappointment, a misfortune or wrong”.

He said the decisions taken at the synod would have “a profound impact on young people all over the world for decades to come”.

“What we are asking people to do is to tell their stories directly to the delegates of the synod. They can do that through the website at equalfuture2018.com.”

Human stories were critical, he said.

Ms Halligan said the public response to her article revealing something she had “bottled up inside” for nearly 40 years had been “overwhelming”. She had received “hundreds” of letters and emails, many from people struggling with their own sexuality and living “sad, hidden lives”.

She appealed to all LGBTI Catholics to use the website to tell delegates to the synod their stories, particularly those who were priests or nuns and leading “double or conflicted lives” because of official church policy.