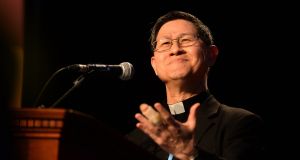 Like an opening act at a rock festival, Filipino Cardinal Luis Antonio Tagle, Archbishop of Manila, warmed up the Catholics at the World Meeting of Families pastoral congress with his folksy charm.

He had landed in Dublin hours earlier at midnight and was running on only one hour of sleep.

A jovial crowd, enjoying the first full day of the congress and its carnival atmosphere, loved it when he joked that he might doze off during his speech.

From the laughs it was easy to understand why this cleric has been tipped as a future pope.

Riffing on the view of the festival’s weekend headliner Francis, that modern society had become a “throwaway culture”, Cardinal “Chito” lamented how the rise of modern consumerism and disposable fashions and products have threatened the value of the people and the planet.

Even if your car worked well, “artificial obsolescence” made you feel that your car was no use, he said.

“Sometimes, because of the influence of the throwaway culture, we don’t even notice that we gauge people according to their market value,” he said.

Other things deemed to be useless, according to the pope, in our “utilitarian culture” were “the unborn child, the elderly, people with so-called disabilities”, he said to several hundred people gathered in Hall Two at the RDS.

Next door, in Hall Four, consumerism and Catholicism sat comfortably beside each other with dozens of religious orders and retailers peddling services and products.

There were even little foetus models on one stall, as captured by a Reuters photographer.

Oliver Brady had shifted quite a number of Pope Francis dolls, imported from Spain, at his Pope Doll Shop.

Defending the €35 price tag on the doll, he said: “It is licensed, it is limited edition and the quality is actually very good.”

Car maker Skoda has used the pope’s visit, and his use of four of its cars in Dublin and Knock this weekend, to put a specially commissioned stained glass windowed Skoda Karoq on display.

“It wouldn’t pass the NCT with that,” said Skoda PR man Cathal Kealey, standing next to the vehicle with 87kg of stained glass and 25m of lead wrapped around the windows.

“We wanted to show the modern car to a modern family in a modern Ireland, ” said Kealey.

It is a model Archbishop Eamon Martin of Armagh would quickly have disposed of. His exclusive view of family, according to his keynote address yesterday, was a “faithful and exclusive union between a married man and a woman as a cherished space for the bearing and upbringing of children”.

Family man Diarmuid Hegarty and his wife Catherine, up from Cork with their six children (aged three to 13), were enjoying the many events for children on offer at the congress.

Hegarty, only a baby the last time Ireland had a papal visit, felt the church was right to resist change that has taken place since then for the benefit of “a la carte members” or “social Catholics”; it might lead to a better, more pure church, he argued.

“If people want to be part of a club, they have to sign up to the rules,” he said.