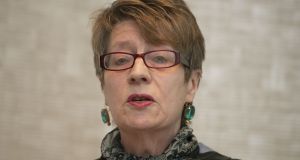 Prof Patricia Casey: “I don’t think anybody I know would want to see a woman die because of a complex pregnancy.” Photograph: Dave Meehan

Consultant psychiatrist Patricia Casey has said that to suggest abortion is a solution to mental illness “is naïve in the extreme”.

Referring to 2010 study headed by Royal College of Psychiatrists in London, she said it found “whether a woman had an abortion for an unwanted pregnancy, or gave birth, made no difference to her mental health outcome”.

The study found no evidence that abortion protected a woman against mental health problems, she said.

She said the Bill the Government intended to introduce should the Eighth Amendment be repealed on May 25th was “very vague in relation to psychiatric assessment”. It contained no definition of mental health and under its terms any medical practitioner could decide an abortion was necessary.

“That, to me, is a gross deficiency in the Bill,” she said.

It could mean “a single doctor, specialty unspecified, can carry out an immediate termination of pregnancy where he or she is of the reasonable opinion that there is immediate risk of serious harm to the mental health of a woman, and it will be lawful to carry that out up until birth”, she said.

The Bill went “much farther than the politicians are pretending . It is extreme, it is unsupportable, and it is not based on any evidence,” she said.

When asked whether she had difficulty with abortion where there was a threat to the physical life of the mother Ms Casey responded “of course I don’t”. She said: “I don’t think anybody I know would want to see a woman die because of a complex pregnancy.”

She was speaking at a press conference in Dublin on Tuesday called by Save the Eighth campaign to challenge what it claimed was misinformation supplied by Minister for Health Simon Harris.