Protection of Life During Pregnancy Act is ‘unworkable’ 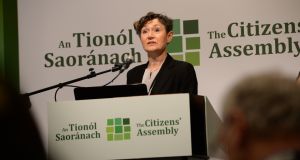 Prof Veronica O’Keane: accessing abortion through the Act is a “lottery” and dependent on which psychiatrist the distressed woman or girl attends. Photograph: Dara Mac Dónaill

The Protection of Life During Pregnancy Act is “unworkable” for women and girls, and “unfair” on psychiatrists, leading practitioners have warned.

John Hillery, president of the College of Psychiatrists of Ireland, said the Act, which sets out the circumstances in which a woman can have an abortion, brought psychiatrists “a step away” from what they are trained to do.

Speaking in a personal capacity, he said psychiatrists were trained to “assess mental illness and treat mental illness”, while the Act required them to make decisions about whether a suicidal pregnant woman should have an abortion.

“It’s really putting it back on psychiatrists to decide something that should be decided by wider society” which then put psychiatrists in the “firing line” when people disagreed with their decision, he said.

He was speaking after The Irish Times reported details of a court case in which a girl who was deemed suicidal and wanted an abortion was detained in a psychiatric unit because her psychiatrist said an abortion was “not the solution”. Ultimately, the court ordered she could be discharged from the unit.

Perinatal psychiatrist Prof Veronica O’Keane said accessing abortion through the Act was a “lottery” and dependent on which psychiatrist the distressed woman or girl attended.

“Some psychiatrists are anti-choice and won’t certify a woman in need of an abortion. Some will refuse to use the Act on the basis of conscientious objection and the woman will have to be referred on to another psychiatrist. There are delays. It’s a lottery, it’s cumbersome and it’s effectively unworkable for women.”

Child and adolescent psychiatrist Peadar O’Grady has for many years been assessing teenagers who are seeking an abortion. He said it was the denial of abortion services that made young pregnant girls suicidal.

“Often, as soon as you tell them they can have an abortion, their distress dissipates. “

Minister for Health Simon Harris said the case highlighted the need for the recommendations of the Citizen’s Assembly to be examined urgently and said he would like to see a referendum on the Eighth Amendment in 2018. Taoiseach-in-waiting Leo Varadkar described the case as “worrying and very disturbing”.