‘The worry of not being able to provide a safe home for us . . . eventually took its toll’ 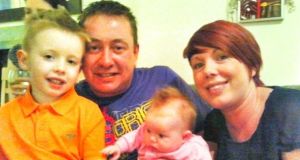 Stephanie Meehan and her partner, Fiachra Daly, with their children, Oisín (7) and Cerys (2). The couple received letters on a regular basis seeking payment for arrears of almost €20,000

A former resident of the Priory Hall apartment complex has written an open letter to the Taoiseach asking him to intervene in the controversy after her partner took his own life.

Stephanie Meehan’s partner of 17 years, Fiachra Daly, died by suicide last July. In her letter, she said pressure to pay arrears on the apartment – in which they have not been able to live for the past two years – appeared to be a factor in his death.

The couple and their two children, along with 65 other families, were ordered to evacuate the apartment complex in north Dublin in October 2011 after fire safety problems and construction defects were found.

The controversy remains unresolved following legal issues and disputes over the renovation and other matters.

“Fiachra was the happiest man on Earth, he lived for myself, Oisín (7) and Cerys (2), he never suffered from any form of mental illness or depression, we had been together for 17 years and I never once witnessed any signs,” she wrote.

“That is up until the week prior to his death, when we received demands from banks, looking for payment of arrears on a property that we can’t live in, asking us to fill out, yet again, forms to request an extension of our moratorium, all for a property we can’t live in through no fault of our own.

“The stress, the worry of not being able to provide a safe home for us, his young children, eventually took its toll, as it has on every resident,” she wrote.

Ms Meehan said she had emailed the Taoiseach’s office on many occasions regarding the situation in Priory Hall, and received only a single reply.

“Our future, security and certainty changed the minute we were evacuated and not one thing has changed in two years, every email, phone call, letter seems to have fallen on deaf ears. So I ask you, what will it take now for someone to listen and act on something that should’ve been dealt with two years ago and saved a lot of taxpayers’ money and most of all saved a life?” she wrote.
“I am left with a lifetime of heartache . . . Is there any justice in this country?”

A spokesman for the Department of the Taoiseach was not in a position to comment on the issue last night.

Arrears
Ms Meehan said last night the couple had received a moratorium on mortgage repayments for the property since they left it 18 months ago, but continued to receive letters on a regular basis seeking payment for arrears of almost €20,000.

“We never had a problem paying for the mortgage when we were living there, we always kept up our repayments.”

The family had been living in a house in Belmayne in north Dublin, paid for by Dublin City Council, until her partner died. She and her two children are now living with her parents.

Support groups in mental health and suicide prevention have reported rising demand for help since the recession started. Experts have called on anyone in distress to seek support or counselling, while financial advice is available from groups such as the Money Advice and Budgeting Service.