Still living at home with the folks? Call in the film crew 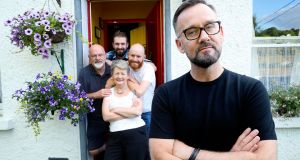 Brendan Courtney in ‘This Crowded House’

Are you in your 20s, 30s – or even 40s – and still enjoying the creature comforts of home? Or desperately trying to move out? Or maybe you’re a hard-pressed parent, looking to get your home – and your life – back after several decades of rearing children, but fear your children might never move on without a little leg up.

If you are any of the above, you’re not alone. Figures from the Central Statistics Office show that almost half a million adult children still live at home, and the number continues to increase, having risen by 3.3 per cent between 2011 and 2016.

While about one-third of these at-home over-18s are students, almost half are in work – and still can’t manage to move on.

A combination of soaring rents and rocketing property prices – not to mind the potential perks of getting your dinner cooked and your clothes laundered – is keeping far greater numbers at home.

If this rings a bell, and you reckon you could do with some outside assistance to complete the move, then the makers of a television programme want to hear from you.

Following on from last year’s popular series of This Crowded House, which followed eight people in their quest to move out of home (and is currently being repeated on Tuesdays on RTÉ 2), production company indiepics is looking for another round of candidates to feature in the second series of the show.

Presented by Brendan Courtney, the show gives successful applicants the help and expertise of a financial adviser, Eoin McGee of Prosperous Financial Services, plus a team of researchers and consultants.

The show’s producers are looking to recruit 12 candidates from across the country to be followed as they seek out a home to rent or buy, and leave their childhood bedrooms behind. Filming will take place over the summer and the show will be broadcast next autumn.

If you’re interested in finding out more before the selection process ends in mid-May, you can email the production team at crowdedhouse@indiepics.ie, or call 01-7088181.