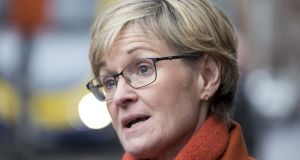 Fine Gael’s Mairead McGuinness is the first of 13 Irish MEPs to be elected. Photograph: Tom Honan.

A group of MEPs has voiced concerns about proposals from Fine Gael MEP Midlands North-West EU candidate Mairéad McGuinness to give churches and secular groups greater access to European Union institutions and MEPs.

In a leaked report compiled by Ms McGuinness and obtained by news website OpenDemocracy, she proposes increasing dialogue between religious organisations and MEPs dealing with legislation proposed by the European Commission.

“This would allow for individual partners to flag up dossiers where they feel they could make a particular contribution. The religious representatives expressed the view that such consultations would help ensure that policy considerations were not limited to narrow sectoral interests, but also took account of broader societal implications of policy and legislation and the need for the legislator to seek the common good,” the report states.

Ms McGuinness, who is vice-president of the European Parliament, insisted that the proposed changes would apply to “all stakeholders” and are “not limited to any one group, so there would not be different levels of access for churches compared to secular groups”.

However, MEPs who are part of the European Parliament Platform for Secularism in Politics expressed “deep concerns”, saying the report appears “to endorse” the views of the churches.

Saying that the recommendations would be “a severe violation” of the principle of separation between religions and politics, if implemented, French MEP Virginie Rozière told OpenDemocracy that they are “completely crazy”.

The report complies with EU treaties and would not offer extra lobbying strength to individual groups, she insisted: “If anything, it is about bringing Europe closer to the people.”

The next moves will be up to the next European Parliament, she said: “The proposals to the bureau were on the basis of which points were broadly supported, feasible and legally possible.”

The churches underlined the presence they have “in virtually every city, town and village across the EU”, she said, and “emphasised the unique value” they offer as “a two-way conduit for discussion about European initiatives”.