Five Irish soldiers took their own lives after Jadotville siege

Irish soldiers who survived the Siege of Jadotville during a UN peacekeeping mission in the Congo in 1961 were presented with specially commissioned medals in Custume Barracks in Athlone on December 2nd, 2017. Video footage: Andrew Clarke / Reuters 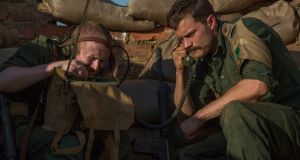 Jamie Dornan (right) in the war drama, The Siege of Jadotville.

Five Irish soldiers who survived the 1961 Siege of Jadotville subsequently took their own lives, an audience in Dublin has been told.

The men had been part of a 150-strong UN peace-keeping mission to Katanga, a breakaway province of Congo, when it was attacked by a force of 3,000 soldiers led by French and Belgian mercenaries. They held out for several days of fierce fighting before lack of water and other supplies forced their surrender.

No Irish soldier died in the attack. But speaking at a meeting of the Trinity Women’s Graduates Association in Dublin on Wednesday night, a sister of one of the soldiers described how her brother never fully recovered from the experience and, years later, ended his own life.

Carrick-on-Shannon native Matthew Quinlan was only 16 at the time of the mission, his first overseas tour. He “loved the army” and was a very skilled gunner, taking out an enemy tank with a mortar during the battle.

But his sister, Bernadette Quinlan, said that, like most of the men, he had been “treated abominably” by the UN and authorities back in Ireland, who had “swept the whole thing under a carpet” as a diplomatic embarrassment.

He left the army a few years later, moving first to England and then Australia, and the family never saw him again.

In 1991, aged 47, he died by suicide. Quinlan took the call from his partner and then had to break the news to her parents. They were dead now too, she said, but it was partly for their sake that she was talking now: “I’ve never spoken about this publicly before.”

The main speaker at the Trinity event was Leo Quinlan (no relation to Matthew), a son of Comdt Pat Quinlan who led the Irish troops at Jadotville, and a former Army officer in his own right.

His talk focused on the effect on the families, including his own, and said that in total there had been five known suicides among the veterans. Many others had struggled to cope with the experience, including another 16-year-old who had shared a mortar trench with Matthew Quinlan.

A film version of the siege, in which Jamie Dornan played Comdt Quinlan, was strongly critical of the UN, especially the role of its head of mission in Congo, Conor Cruise O’Brien, and the then Army Chief of Staff, General McKeown. Closely based on the real events, it had the blessing of veterans, many of whom attended the opening.

Leo Quinlan told the Trinity audience it was a truism in military life that every battle “had to be fought twice”. The first was the actual battle; the second was with the historians. He too was 16 at the time of the attack but had spent much of his adult life working to set the record straight on the treatment of the troops, during and since the battle, which he called a “scandal”.