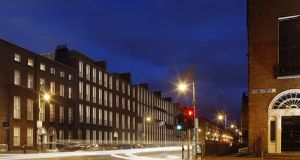 ESB has appointed PJ Hegarty & Sons as the contractor for the redevelopment of its head office site, according to a statement.

The 45,000sq m development involves the demolition of the existing buildings, the retention and refurbishment of a number of protected Georgian structures and the construction of a new seven-storey office block.

A company statement says that the development “will deliver a near zero energy building . . . while sensitively respecting and enhancing the Georgian streetscape”.

“This building will be an exemplar of sustainability and innovation which reflects the ethos of ESB and it also respects the surrounding Georgian architecture,” said Pat O’Doherty, chief executive of ESB.

Planning permission for the site on Lower Fitzwilliam Street in Dublin 2 was granted in 2015 and the company’s tendering process began after that with PJ Hegarty & Sons ultimately being awarded the contract.

Works are expected to commence on the building in June 2017, and the company anticipates that the work will create up to 500 jobs during peak construction over approximately three years.