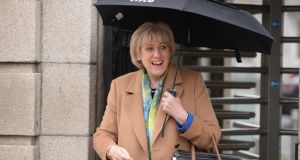 Minister for Social Protection Heather Humphreys has said that the decision to extend the Pandemic Unemployment Payment (PUP) to the end of March was intended to give people peace of mind.

The decision was approved by Cabinet on Tuesday morning following engagement by Ms Humphreys with the hospitality and retail sectors.

“I knew that there was concern that as staff return to work in December they might not be able to access PUP again in the new year if they needed to,” she told RTÉ radio’s News at One.

“As Minister I wanted to give certainty to people.”

Ms Humphreys said she believed this was the right thing to do. “It means that people who, hopefully will be able to return to work in the coming weeks, will be able to do so without worrying that they might not be able to access PUP again if they need it.

“Obviously we hope that people won’t need to go back on PUP, but the one thing we have seen with Covid is that nothing is certain. We didn’t want that sort of stress hanging over them.

“By keeping the PUP open to new entrants I’m ensuring that we don’t have a situation where people are worried or they choose not to go back to work for the fear that they won’t be able to access it in the future.”

At the beginning of the Republic’s Covid-19 crisis, Government moved swiftly to shore up personal finances by introducing the PUP. It was originally envisaged that the payment would come to an end on September 17th.

The number of people receiving the payment has fluctuated over the course of the pandemic as the State has moved in and out lockdowns which have affected multiple areas of Irish society and the economy.

On Monday, it was reported that the total number of people receiving the payment has exceeded 350,000, an increase of over 145,000 since the beginning of October. The Department of Social Protection has said that since it was introduced March 2020 more than €4.3 billion has been paid out under the scheme.