‘The big concern is if we open and have to close again. If that happens, we will be in serious trouble’ 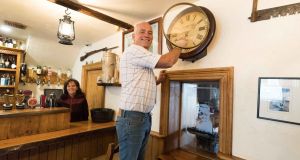 Robert Cassidy, watched by his wife Michelle, restarts the clock, which has been in the pub since 1851, as they prepare to reopen Cassidy’s Pub in the Burren at Carron, Co Clare. Photograph: Eamon Ward

One of Ireland’s oldest pubs could be forced to close forever if a spike in coronavirus forces restrictions to be tightened again in the coming weeks.

The Cassidy family has operated a pub in the tiny village of Carron in the centre of the Burren since 1796. The current owner, Robert Cassidy, said he is taking a big gamble by deciding to reopen the premises this weekend.

Mr Cassidy has invested €20,000 to restock the pub and restaurant and said that hundreds of businesses in rural Ireland will be in “serious trouble” if they are forced to close again.

“The big, big concern that we have is if we open it and we have to close again. If that happens, if we open now, fully stocked up, and are forced to close after a week or two, we will be in serious trouble,” he said.

“We need to put €20,000 into this place to get it open, and if we have to close again that will be gone and we probably won’t get another chance to open this year.

“This is a really chancy move for us. We didn’t decide that we would open until a few days ago. One of the girls who plays music in the pub on a Friday night asked us to host a family birthday, that’s more or less when we decided that we’d give it a go.

Cassidy’s Pub normally employs 14 people during peak summer season but uncertainty over trading this year made recruitment difficult. The pub and restaurant will open this weekend with eight employees, mostly family and long-serving staff.

“We are taking a chance and we are asking our staff to take a chance. They are going to have to come off whatever supports that they’re on to come to work. I’m asking them to take a chance to work for me,” said Mr Cassidy.

“A couple of the people who we ask to come back to work asked, ‘Are you sure we’re going to have a job in September’, and the truth is that we aren’t. We just can’t guarantee that we will still be here.”

Cassidy’s is one of a handful of traditional, family-run pubs still operating on the west coast of Ireland. Mr Cassidy believes the pandemic has the potential to be the final nail in the coffin for many of these historic establishments.

“If this goes wrong, it’s the genuine, small businesses that will lose out. We will be left with nothing but plastic pubs in Ireland,” he said.

“We’re probably one of the oldest pubs in Ireland, run by the same family since 1796. If that link is broken you can’t bring it back. I think the way they [successive governments] are going, they are going to destroy the traditional pubs in the country areas and then 10 years from now they will be giving grants to people to keep these pubs open.”

Carron is the only village in the centre of the Burren, located 15km from Gort, Ballyvaughan, Corofin and Lisdoonvarna. For many living in the locality, Cassidy’s Pub is their only social outlet.

“We were set to open again for Paddy’s Day and then this happened. It’s been very tough on people. We are the only pub and restaurant on the Burren mountain, everything else is on the coast,” said Mr Cassidy.

“We are very rural here and a lot of our trade comes from Burren walks that start at the pub. We don’t know are people going to be happy to come into a pub for something to eat after their walk this year.

“A lot of these people are retired, people in their 70s who might be very slow to come into a pub.

“Some of our best customers, people who come here every week in normal times, have already said to us that they’ll be getting takeaways from us for this year.”

Mr Cassidy believes publicans should be given more autonomy to manage their premises as they see fit during the pandemic.