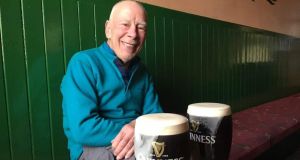 Sé O’Hanlon (78), who does a 2km circuit from his home, says he has not been stopped by gardaí on his bike yet. ‘I wear sunglasses.’

Sé O’Hanlon (78) is not a happy man. On these shiny, bright Spring days he does not take kindly to being told “níl cead agat dul amach” beyond his Dublin front door.

Four outright wins, 24 stage wins and 37 yellow jerseys illustrated his stature as the most successful Ras rider ever. He also won the Tour of Ulster in 1961, 1962, 1965, 1966, raced in France, and now he can’t get outside the house in Glasnevin. “Finglas/Glasnevin, as they say.”

Up to this he went climbing twice a week with a group of about 10 friends, most over 70. “I never asked their ages.” That was at the Dublin Climbing Centre in Tallaght and Awesome Walls off the M50.

Now - after Friday’s latest Government restrictions - there is just the walls of his house. And TV. “I never watch TV.” But “I do jobs around the house.”

People living in the same household can only take brief physical exercise together – once they stay within 2km of their home and always maintain two metres distance between themselves and other people.

He “was coping grand until last Monday. Here, living with my son two metres apart and out everyday on the bike for an hour and going out every Sunday for a walk in the hills, for an hour to an hour and a half.” But now “all that’s stopped.”

Not quite. In a candid and unsolicited confession he admitted “I’m on the bike every day, doing a few kilometres in the 2km circuit. I’m not supposed to. The lads said it (regulation) only applied to those who were biologically over 70, not those who are chronologically over 70.”

Besides, he touches no one while on the bike, so where is the harm in that? However he is, he admits, “an unrepentant sinner who knows he is a sinner.”

He has not been stopped by gardaí yet. “I wear sunglasses,” and other sundry distractions. He knows how hard it can be to keep up fitness levels through recovery from injury in the past, when he “nearly chewed my arm off” with boredom. He did not want that to happen again.

And there was his friend who recently had open heart surgery. “What’s he supposed to do? He was told to walk 15 minutes a day and increase that by five minutes every week. What does he do now?”

Basically Mr O’Hanlon believes there should be exceptions to the ‘stay at home and cocoon’ rule for some over 70s. Some, like him, and his hearty friend.

Although he admits he himself had “a cardiac arrest four years ago, but that is well over.” It was true too he had “an abdominal operation last September” and “a stroke three weeks ago”. But, “it had no effect.”

He is “in great health” and “I’m not near anyone out on the bike.”