Measure would come on top of other multi-billion rescue packages 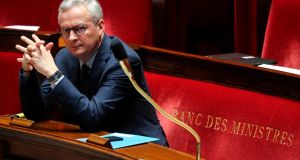 France is pushing for a common EU fund to help Europe through the coronavirus crisis, but is proposing that it be limited to five or 10 years and focused on economic recovery to head off German and Dutch objections to mutualising debt obligations.

“We are thinking about a fund which would be limited in time with an indebtedness possibility for the long-term response to the crisis,” French finance minister Bruno Le Maire told the Financial Times. “It’s absolutely crucial to keep the door open for long-term, broad instruments that would allow us to face a ‘postwar’ economic situation.”

Mr Le Maire said the idea of the fund – which would come on top of other multibillion-euro rescue packages offered or being negotiated by other EU and euro zone institutions – derived from president Emmanuel Macron’s proposal for common “coronabonds” or “eurobonds” that was supported by eight other euro area governments but rejected by others.

He said there was room for compromise at forthcoming meetings of the 19 euro zone countries and 27 EU members.

“Having a fund for, let’s say, five or 10 years – with a limited timeframe – and with the possibility of having common debt but only within that fund, which might be more acceptable for other countries, might be a solution.”

France and its allies have already suggested using the EU’s next long-term budget, the so-called Multiannual Financial Framework (MFF), over which talks were already stalled before the coronavirus crisis, to provide long-term help to members such as Italy and Spain hard hit by the pandemic.

“If there is a difficulty for many member states to have this possibility of making common debt within the MFF, let’s think about the same kind of possibility outside the MFF for a limited period of time with a clear focus on economic recovery after the pandemic,” Mr Le Maire said.

The next package of crisis measures to be agreed by EU or euro zone members is likely to come not in the form of the French-proposed new fund or common bonds, but from the existing European Stability Mechanism, which has a total of €410 billion in lending capacity at its disposal.

Klaus Regling, ESM managing director, said this week that it would take up to three years to set up a new European institution to issue coronabonds. “[M]ember states have to come up with capital or guarantees, or assign future revenue,” he said. “One cannot create bonds out of nothing.”

Mr Regling said boosts to mutualised debt issuance in the short term would have to come from the ESM, the European Investment Bank or the European Commission, which could issue more debt under the forthcoming seven-year MFF.

Mr Le Maire’s proposed fund, a French official said, could “complement” the MFF and be managed like the MFF by the commission.

Charles Michel, who heads the EU Council, acknowledged on Tuesday that it was “time to think outside the box” and that the EU budget would “have to be adapted to this crisis”.

He said after a videoconference with the heads of the commission, the European Central Bank and the eurogroup: “The only way forward is a common strategy in a spirit of solidarity ... To jump-start the European economy, we will have to use all levers available, at national and European level.”

Mr Le Maire also called for help for developing countries that are likely to suffer economic damage from the pandemic.

France has called for a moratorium on bilateral sovereign debt payments in the Paris Club framework, as well as swap lines to provide foreign currency needs and a new IMF allocation of $500 billion worth of special drawing rights for developing nations. – Copyright The Financial Times Limited 2020

Values advance on hope of restrictions being eased globally 18:49
Aston Martin chief to leave as part of shake-up 17:42
Ryanair goes to court over conduct of social welfare appeal 17:29
Office chitchat is essential for the free flow of ideas 17:03
More than 1,000 pubs have an interest in FBD ‘test case’, court told 16:45

1 More than 1,000 pubs have an interest in FBD ‘test case’, court told
2 Ryanair goes to court over conduct of social welfare appeal
3 Schrems calls on EU authorities to intervene in ‘Kafkaesque’ DPC case
4 Will remote working mean an end for the corporate HQ?
5 Pricewatch: Coronavirus has given us four categories of shopper
6 Values advance on hope of restrictions being eased globally
7 Office chitchat is essential for the free flow of ideas
8 Volkswagen agrees to compensate tens of thousands of German motorists
9 Player Wills site: Hines and APG to seek permission for 416 homes
10 Economies can be restarted if bold and imaginative choices are made
Real news has value SUBSCRIBE