NGO heads tell UN how Ireland let them down 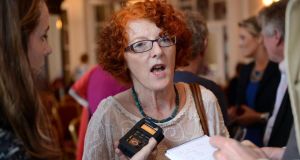 Marie O’Connor of the Survivors of Symphysiotomy: asked UN for help in redress

Ireland’s refusal to admit the practice of symphysiotomy was “torture, cruel, inhuman and degrading” brought an Irish group representing survivors to the UN, its spokeswoman said.

Marie O’Connor of the Survivors of Symphysiotomy told the UN Human Rights Committee in Geneva the practice was a “very serious human rights abuse” that was not on the committee’s list of issues.

She was one of nine speakers, representing 16 Irish non-governmental organisations, appearing before the committee, which is reviewing Ireland’s compliance with the International Covenant on Civil and Political Rights.

“An estimated 1,500 women and girls, some as young as 14, had their pelvises broken, gratuitously, by doctors who believed in childbearing without limitation,” said Ms O’Connor. “Life-long disability, chronic pain, mental suffering and family breakdown followed. Patient consent was never sought.

Survivors’ rights “The State has failed to provide an effective remedy. There has been no independent inquiry.”

She asked the committee to urge the Irish State to vindicate the rights of the 250 or so surviving women.

Sineád Corcoran of the Abortion Rights Campaign gave a joint statement on behalf of six NGOs including the National Women’s Council, the Irish Family Planning Association and Terminations for Medical Reasons group.

“I am a Traveller woman and proud member of Ireland’s indigenous ethnic minority. Our organisation has been calling for this basic right to be recognised for 23 years.”

The committee also heard from the Immigrant Council of Ireland, Irish Council for Civil Liberties, Inclusion Ireland and the Penal Reform Trust.