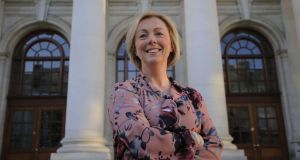 Minister for Social Protection Regina Doherty: said the reforms were an example of “the many measures” the Government is implementing to assist people and families to gain employment.

Jobless families in key parts of the country will be targeted under new Government reforms aimed at lowering the number of children growing up in homes where no adult is at work.

Under a new action plan published on Monday by Minister for Social Protection Regina Doherty, there will be “family-focused” case management of unemployed couples with children.

This will mean couples will be jointly required to attend for interviews with welfare authorities to examine any barriers to employment that may be shared rather than specific to either partner.

“The intention would be to broker smooth and timely access for couples to necessary supports in areas such as childcare, education and training, and social services more generally,” the action plan states.

The new approach is due to be trialled in five areas: Dundalk, Cork, Waterford, Tallaght and Limerick.

They form part of several reforms which the Government says are aimed at “assisting people and families to become more work-ready and gain employment”.

The level of household joblessness in Ireland – measured at about 18 per cent in 2015 – is close to the European Union average and trending downwards.

However, the proportion of children living in jobless households is higher than EU levels.

The new action plans focuses in particular on improving employment rates for these households with children – both the traditional “nuclear’” family and the lone-parent family.

A key reform is changing jobseekers’ payments and supports for adult dependants on jobseeker claims who have a capacity to work.

Many of these adults are not classified as “unemployed” – ie being available and seeking employment – such as those not working for reasons such as disability or caring responsibilities.

The action plans says “active engagement” will be extended to these groups.

This means that while they will not required to comply with the availability and job-search conditions of unemployment payments, they will be expected to engage with the “activation process”, according to the Department of Social Protection.

In consultation with the disability sector, it says the main illness and disability payments are to be “reconfigured” to introduce a principle of early intervention.

This, it says, will help secure better employment outcomes among people with a disability who could, with appropriate supports, take up employment.

The “jobseeker’s transitional” model will be extended to these groups. This was a reformed welfare payment made available to lone parents under recent reforms which allows recipients to hold on to a proportion of their welfare payment for a period once they start work.

The action plan also states that steps will be taken to improve incentives and remove barriers for people moving from welfare to employment by removing disincentives lined to rental supports and expanding access to subsidised childcare.

In addition, the plan sets a new headline target to reduce the proportion of households that are jobless from 18 per cent to 13 per cent by the end of the decade.

It also aims to reduce the share of the 18-59-year-old population resident in such households to less than 12 per cent to 8 per cent over the same period.

Ms Doherty said the reforms were an example of “the many measures” the Government is implementing to assist people and families to become more work-ready and gain employment.

“The action plan for jobless households is about both employment activation and identifying and removing the barriers that are currently preventing people from getting a fair chance, and for some a second chance, which is at the core of building a republic of opportunity for all,” she said.