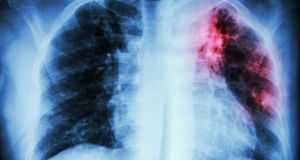 Most TB cases are caused by breathing in bacteria; only a small number of people who breathe in the TB germ get sick, says HSE. Photograph: iStock

A woman living in a direct provision centre in Co Galway has accused the HSE of failing to respond quickly enough to a tuberculosis diagnosis in the accommodation centre and says adequate measures were not taken to protect the health of residents, including children.

The woman, who lives in the Eglinton Hotel direct provision centre in Salthill, received a letter from the HSE on Thursday, October 17th, informing residents that children in the centre may have been in contact with “a case of infectious TB” and that doctors would visit the following day to conduct precautionary screenings on children under five.

The letter, seen by The Irish Times, states that the doctors would carry out TB screening known as the Mantoux test, which involves an injection on the forearm, on young children, on Friday.

When asked for information on how long the patient with TB had been staying at the hostel, HSE doctors who visited the centre last Friday would not say, according to the female resident.

“I asked what precautions had they taken to stop the disease spreading and [one of the HSE doctors] said the case had already been taken care of and there was no longer a risk,” said the woman, who wishes to remain anonymous. “I said, ‘It doesn’t matter who the patient is but you didn’t warn us.’ We weren’t wearing masks and were sharing the same plates in the same kitchen.”

The resident also expressed concern that her own child, who is over the age of five, did not receive the screening test. “The results came back [on Monday] and they found some of the kids were infected from the bacteria,” she said. “They referred them on to hospital to have an X-ray and told us we shouldn’t panic, that everything was under control.”

When the woman visited the GP with her child, on the advice of the HSE, she said her local doctor expressed surprise at the situation in the centre.

“To be honest I don’t think they responded well. Their first step when the patient with TB arrived in hospital should have been to isolate the person until everyone else was checked. Not wait until after they had treated the case. Now when they came, they only checked the small kids.”

The BCG vaccine, which protects children from TB, is no longer being given routinely to all children in Ireland due to a shortage in supplies, according to the HSE.

In response to queries, the department of public health in HSE West confirmed they had investigated a case of TB at a “shared accommodation” in Galway city and that the patient was under medical care, had been undergoing treatment since diagnosis and was not infectious.

Following notification of this case, public health doctors started testing those who had been in close contact with the patient. They prioritised “contacts most vulnerable, such as very young children” for initial screening, according to the HSE statement. It added that it would continue to investigate and manage the situation.

“The aim of contact tracing is to help identify any other TB cases early and to reduce illness among those who have been in contact with TB patients”, the HSE statement continued. “If a person is diagnosed with TB, the person is offered treatment as soon as possible. If a person is diagnosed with latent tuberculosis infection, he/she may be offered preventive medication that can reduce their risk of becoming ill with TB.”

The HSE noted that people living in the same house as the person who is sick or are in close contact with them would be most at risk. Most TB cases are caused by breathing in bacteria; only a small number of people who breathe in the TB germ get sick, it stated.

A spokesman for the department of justice said the International Protection Accommodation Service (formerly the Reception and Integration Agency) had been made aware of the TB diagnosis in Galway and was “committed to the fullest co-operation with the HSE” regarding the matter.