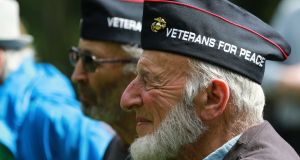 US President Donald Trump’s “passive encouragement of violence is insidious and is eating away at the fabric of decency throughout the world,” the annual Hiroshima Day commemoration in Dublin was told on Tuesday afternoon.

“What is the likelihood of Trump initiating a nuclear strike? He has withdrawn from a key bilateral nuclear weapons treaty with Russia, he has pulled out of the Iranian nuclear deal, he has announced he will increase the US nuclear arsenal.

“Yet more Americans have been killed this weekend than have been injured or jailed in Iran all this year… for many years,” said Canon Patrick Comerford, President of the Campaign for Nuclear Disarmament (CND).

There had been 246 mass shootings in the US so far this year, he said. “More weapons of mass destruction have been used in America this year than ever provided the excuses for the war in Iraq. And still Trump laughs and jokes at a rally when someone suggests shooting immigrants,” he said.

The Dublin commemoration marks the 74th anniversary of the dropping of the world’s first atomic bomb by the US on Japan’s Hiroshima on August 6th 1945.

The Nuclear Non-Proliferation Treaty, designed to prevent the spread of nuclear arms, “seems to be in meltdown. The preparatory meeting in May for the treaty review conference next year [2020]failed to produce any concrete outcomes,” Canon Comerford said.

“As long as there are nuclear weapons in the world, and as long as world leaders threaten to use them, we must continue to remember the victims of Hiroshima, for they are a reminder of the consequences we all face if we fail not only to control nuclear weapons, but to abolish them completely.

“We cannot trust the people who are in charge of the world’s stockpiles of nuclear weapons. Consider the on-again, off-again nuclear talks between president Trump and chairman Kim (of North Korea),” he said, while “the five permanent members of the UN Security Council are all in possession of nuclear stockpiles: the US, Russia, China, Britain and France”.

He said that” having let Trump know that he was not welcome in Ireland a few months ago, we must now organise to make sure Pence knows he is not welcome either.”

The US vice president Mike Pence is to visit Ireland next month. “ Trump and Pence must know that they have no friends here, that they can expect no passive acceptance.”

Last year, Mr Trump said the US would outspend any other country in building up its nuclear arsenal in what was perceived as a direct challenge to Russia and China.

“We have more money than anybody else, by far. We’ll build it up,” Mr Trump said after being asked late on Monday if he was prepared to build up the US’s nuclear arsenal.

Other attendees at the commemoration were Kenichiro Sasame, deputy head of mission at the Japanese Embassy and Lord Mayor of Dublin Paul McAuliffe.