Farming scheme for vulnerable adults a ‘win-win’ for rural Ireland 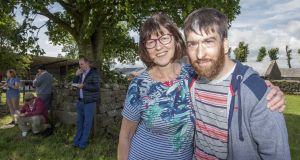 Mary Caulfield from Co Roscommon with her son, Seamus, who participates in social farming, supported by the Brothers of Charity, Roscommon. Photograph: Brian Farrell

The number of farmers who provide training and care to vulnerable people, including those with intellectual and physical disabilities, could be increased 10-fold with proper cross-department support, according to advocates.

Professor James Kinsella from the School of Agriculture and Food Science at University College Dublin said there were currently 100 farms around the country involved with Social Farming Ireland (SFI) but with proper resources “it’s not pie in the sky to say this could be 1,000”.

SFI provides opportunities for people recovering from mental illness, the long-term unemployed, early school-leavers, refugees and people with intellectual and physical disabilities to work alongside farmers. Advocates say that the opportunity to do meaningful work, to socialise and spend time in the open air or working with animals has many therapeutic benefits.

Prof Kinsella who was involved with SFI when it started as a cross-Border project in 2011, said the benefits for both participants and farmers was hard to quantify, with the scheme providing a lifeline for some farmers. “Involvement in this could be the key to keeping a family on a 60-acre farm in the west of Ireland or in any part of Ireland,” he said.

The Department of Agriculture had been critical to “keeping the scheme alive”, he said, but that other departments needed to step up.

Brian Smyth national project manager with Letirim-based SFI agreed that it delivers services which come under the remit of other departments such as health, employment affairs, education, and justice but these “have not been as quick to support the development and sustainability of social farming as [the Department of] Agriculture has”.

That department provides an estimated €500,000 annually to operate the scheme nationally, while an additional €240,000 is provided for two localised schemes in Cork and Kerry.

Research carried out by SFI’s policy officer Dr Aisling Moroney found that 87 per cent of participants would like the scheme extended beyond the existing 30 weeks. At the launch of the research several farmers spoke of their experiences.

John Normanly, a farmer from Curry in Co Sligo, has hosted six trainees and their six carers from Cregg House, Sligo, at one time, including participants who are non-verbal, cannot hear and use wheelchairs. The sheep farmer created a path through his land to make it wheelchair-accessible, “so that they can enjoy the smell of the forestry” and enjoy the sensation of being in the open air. He has also loaded wheelchairs on to a trailer so that programme participants can enjoy the sensation of the wind on their faces as he drives around the farm.

“And food is a great leveller. I put on a big pot of stew and everyone enjoys it,” explained the farmer who says one of the benefits is that he is forced to “move down a gear” to focus on the participants.

“Carers tell me that even on the bus home they see a new calmness among the participants,” he said. “It’s all about giving back. I was very ill when I was a young man but here I am at 62 , glad to be here and to share what I have”.

Prof Kinsella acknowledged there was a cost to farmers in term of time supervising the participants as well as providing everything from “lunches and wellies to insurance and transport”.

Mary Caulfield’s son Seamus (38) is one of more than 300 participants, now participating in the scheme which operate in 25 counties in the Republic. She said that working on a farm in Co Roscommon had changed her son’s life, giving him a purpose, a social outlet and a job in the outdoors where he thrives. After some “challenging and difficult times” her son now loves getting up in the morning and going to a job where he has he opportunity to socialise over a cup of tea in the farmhouse kitchen.

“We all want to be the best version of ourselves and Seamus experiences that every day he goes on the farm,” she said.

The number of participants nationwide will rise to 450 this year. It is estimated that 60 per cent of social farming activity in Ireland is in the intellectual disability sector.

June Danaher who has a suckler herd as well as hens, ducks, goats and alpaca on her farm at Shanagolden Co Limerick, says the trainees very quickly become part of the family.

“We have men in their 30s who are intellectually disabled and it is so rewarding for them to see the end product of their hard work, whether that is picking stones to build a wall or planting seeds,” she said.

Helen Doherty, national co-ordinator with SFI, said that funding needs to be trebled if the project was to reach its full potential. Longford is currently the only county with no social farming project but two farmers are being trained there.