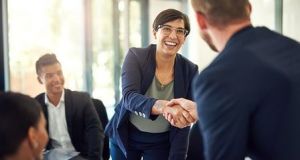 Eurostat research for 2014 found women occupied 43 per cent of management positions in Ireland, compared with just 22 per cent in Germany, Italy and Cyprus. File photograph: iStockPhoto

Ireland’s workforce has a higher-than-average percentage of female managers and the gender pay gap at managerial level is narrower than in most other EU member states, a new report has found.

Despite comprising approximately half of the overall workforce across the bloc, women occupied just over a third of managerial positions at companies employing 10 or more people in 2014, according to figures compiled by Eurostat.

Latvia was the only country where women were in the majority in managerial roles, at just over 50 per cent. While the gender split was not as even in Ireland, women occupied 43 per cent of management positions, compared with just 22 per cent in Germany, Italy and Cyprus.

Ireland was also one of the top performers when it came to gender pay gaps. Its 16 per cent differential between men and lower-paid female colleagues of equal standing was the fifth-smallest in the EU.

Again, Italy had the largest pay gap of 34 per cent between men and women, as was the case in Hungary. The EU average was 23 per cent.

The statistics were extracted from a four-yearly structure-of-earnings survey for which the reference year was 2014, and were published ahead of International Women’s Day on Wednesday.

Management positions were identified according to standardised international classifications across various sectors including industry, construction and services.

Whereas the Eurostat report makes for encouraging reading in a comparative context, more general figures published by PwC last month showed the pay gap between men and women has actually widened in Ireland between 2012 and 2015.

Ireland remained in 25th place out of 33 countries in the latest edition of the Women in Work Index, the same ranking it held in 2000. At the very highest level, Irish boardrooms had less participation from female directors than was the case in the UK and France.