Citizens’ Assembly to be balloted on abortion recommendations 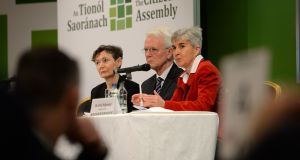 Prof Veronica O’Keane of Doctors for Choice and Dr John Monaghan and Dr Orla Halpenny of Doctors for Life at the Citizens’ Assembly session in Dublin on Sunday. Photograph: Dara Mac Dónaill

Members of the Citizens’ Assembly will be balloted next month on recommendations that they will give to the Government on the future of the constitutional amendment on abortion.

The 99 members will agree on the issues to be included in a ballot, and on the precise wording of the ballot, and that will be voted on, assembly chairwomanMs Justice Mary Laffoy said.

The result of the vote will form the recommendations given to the Houses of the Oireachtas.

Ms Justice Laffoy identified a paper on Saturday given by legal expert Brian Murray SC as of the “utmost importance” in the assembly’s deliberations.

If the eighth was repealed, it would then be solely up to the Oireachtas to decide what, if anything, would replace it, he told the members.

If the Oireachtas did nothing, the present law, the Protection of Life during Pregnancy Act 2013, would prevail.

However, he stressed the courts could interpret where the law stood as far as abortion was concerned and might take different viewpoints.

Assembly members yesterday heard from 17 advocacy groups chosen to represent both the pro-choice and anti-abortion positions.

Patrick Carr, from anti-abortion group Family & Life, suggested the presence of two women from the “abortion industry” at a previous session was proof that the “assembly was being firmly guided towards a predetermined outcome”.

Gilda Sedgh from the Guttmacher Institute in New York and Dr Patricia Lohr from the British Pregnancy Advisory Service addressed the assembly in February.

Ms Justice Laffoy responded by stating it would have been a “serious omission” not to include testimony from organisations that support abortion.

She said both women had been asked to contribute at the request of the members of the assembly who wanted to hear how Ireland’s abortion regime sits among other developed nations.

Colm O’Gorman of Amnesty International said abortion was a much less divisive issue than some had claimed.

Repeated polls had shown that 80 per cent of the Irish public would opt either repeal or amend the eighth amendment, he said.

He proposed that a solution would involve repealing the eighth, the full decriminalisation of abortion and the introduction of a human-rights-compliant framework for access to and information about abortion.

Maria Steen from the Iona Institute said holding a referendum on the eighth amendment would be wrong.

“It puts the power in the hands of the majority to vote away the only defence a given vulnerable minority has from the same majority.”

The assembly members heard graphic evidence from US doctor Dr Anthony Levatino, who performed 1,200 abortions in the 1980s.

Dr Levatino, on behalf of the anti-abortion group Women Hurt, said he had performed second-trimester abortions where he removed arms and legs from aborted foetuses.

“The betrayal of women is total. Future generations will look back in disgust and disdain at the casual, nonchalant way human life is disrespected today,” he said.

Rebecca Kiessling from Youth Defence said abortion was loved by “sex traffickers and child molesters. It destroys the evidence. It protects and enables them so that they can continue.”

Sinéad Redmond from Parents for Choice said the amendment did not make Ireland a safer country to have babies.