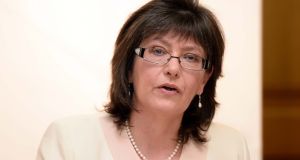 The Policing Authority, led by Josephine Feehily (above), said the falsification of figures was about “feeding the beast”, not about detecting or preventing drink-drivers and educating the road-using public. File photograph: Eric Luke

The Policing Authority has said gardaí may have exaggerated the number of breath tests by an additional 400,000 on top of the 1.5 million false breath tests already identified in an internal Garda report.

An independent review of the falsification of Garda breath test figures advises the level of discrepancy is significantly greater than the 1.458 million reported by An Garda Síochána.

While it says the extent of the issue will “probably never be known”, the authority says the core issue is the fact that such a matter was allowed to develop without anyone noticing.

“Given the obvious scale of the discrepancy, the precise number is somewhat secondary to the fact that it occurred at all and that it continued for so long.”

The report of the review, conducted by Crowe Horwarth on behalf of the Policing Authority, says the reaction of management when learning of the discrepancies was slow and took no account of how serious a problem this was.

The Garda watchdog, led by Josephine Feehily, said the falsification of figures was about “feeding the beast”, not about detecting or preventing drink-drivers and educating the road-using public.

The debacle “raises questions” about how the force operates daily and these shortcomings have not been resolved, the Policing Authority said.

The independent investigative process also concluded that not only were breath tests fabricated, but whole checkpoints were.

In strong remark at the launch of the authority’s independent report into the controversy on Wednesday afternoon, chairwoman Josephine Feehily said “training ought not be necessary to be honest”.

She added she could not assure the public that the same problems would not happen again, adding proper training needed to be developed.

Asked if disciplinary proceedings should be progressed, Ms Feehily said this was a matter for the Garda Commissioner to decide.

Widespread discipline may be difficult to enforce but where there is prima facie evidence available to the Commissioner action should be considered, Ms Feehily added.

However she urged the Commissioner to pay particular attention to the managers of 14 divisions who did not respond to a direct request from the Garda Commissioner to investigate their own area.

The report stresses the lack of accountability across the Garda Síochána is the reason for the deliberate entering of incorrect data.

Such behaviour continues to this date, the watchdog says, where half of the Garda divisions appear to have done nothing despite the public and political concern about this matter.

The report was commissioned after it emerged gardaí had exaggerated the number of breath tests it conducted over a seven-year period.

It finds Garda members developed a tendency to overestimate, guesstimate, and/or round up the actual numbers of tests performed at mandatory drink driving checkpoints.

This was based on an implicit pressure on rank and file members to get the numbers up, the report says.

Some gardaí reported supervisory sergeants suggesting the numbers should be inflated to comply with management expectations.

Others reported taking advantage of the lack of frontline supervision, allowing them to remain in the station or patrol car instead of conducted the authorised checkpoint.

There was no formal requirement and no official directive issued to members but there was implied pressure on rank and file gardaí, the authority says.

Often there was competition and rivalry between divisions to ensure it was not at the “bottom of the league” in terms of the number of checkpoints carried out.

“This was interpreted by many frontline and supervisory Garda members as meaning that MIT checkpoint data needed to be maximised.”

While senior officers have insisted there was no direct pressure placed on members, targets were set in policing plans as far back as 2010.

However, the authority has stressed it has found no evidence to suggest individual gardaí benefitted from the exaggeration of Garda figures.

Fabrication of MIT checkpoint data to justify a false claim for overtime payment would represent both a disciplinary and criminal matter but the authority says it has no evidence to suggest this occurred.

The authority criticises the reduction in supervisory ranks stressing this has reduce the ability of An Garda Síochána to provide adequate supervision and support.

This allowed a culture to develop where there was no expectation among frontline staff that the numbers they inputted would be checked or their actions supervised.

The report says: “We have a concern that national level statistics continued to rise at a time when human resources were being cut, when overtime budgets were being squeezed, and when frontline supervision was reducing – yet no one at senior management level seemed to say ‘this appears to be too good to be true’.”

Ms Feehily said there isn’t full appreciation within the Garda of the depth of the problem. Therefore the Policing Authority cannot offer any assurance this will not happen again, she said.

The report presents a disturbing description of an organisation that has significant problems with supervision, the chairwoman added.

She said there is an enduring view that there is no training required for behaving honestly and ethically.