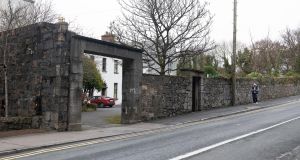 Part of the former Magdalene Laundry in Galway, which is to be renovated by the homeless agency Cope Galway. Photograph: Andrew Downes

The story of inmate number 105, who climbed out over the roof in a heavy shower of rain in an attempt to escape, and the tale of a family who smuggled girls out in laundry baskets, are among the experiences associated with Galway’s Magdalene laundry that appear in a newly published booklet.

The life of the late Lily McAllister, who also escaped from the laundry in the late 1950s, and the memories of two sisters who witnessed a mass escape via a workmen’s ladder, also form part of the record of the former Magdalene Asylum and Laundry in Galway city centre.

The booklet, entitled Remember, Respect and Record, has been compiled for homeless agency Cope Galway, which has been given the convent section of the Mercy Order building to develop a facility for its domestic abuse service.

Former inmates, and families who tried to help the women, were interviewed for the booklet, which was produced by John Tierney, director of the Historic Graves Project.

Records of 80 women who were buried either in graves at the site or in the cemetery in Bohermore are also published as part of a memorial to all those who lived and worked in the laundry.

Galway’s first Magdalene asylum was opened by a lay charity group led by a Miss Lynch in 1822, and was taken over by the Sisters of Mercy religious order in 1854. The nuns ran it as a combined “commercial enterprise and care facility” until the 1990s.

Four individual accounts include that of Maisie Kenny (not her real name), who was sent to the laundry in 1948 at the age of 14.

Her identity was a number – inmate 105 – and she worked long hours with women who had been separated from their infants at the Bon Secours mother and baby home in Tuam. She escaped in a deluge during Christmas 1951 by climbing out over the roof.

Áine Hickey and her sister witnessed a mass escape in the 1960s, which took place when workmen replacing windows left ladders in place during their break. She recalled seeing “apron and skirt blowing ” as an estimated 30 young women descended and ran.

While the Garda caught and returned some of them, others made it to Dublin or England with assistance from Galway families who gave them money and clothes.

Hugo McEntee, whose family helped a number of the Magdalene women, was also interviewed. His mother, Ena, had worked in the laundry and his father Hugh was a van driver who would help to smuggle women away. Others would climb over the wall and ask for the “McEntees”.

Áine McDonagh’s memories of the late Lily McAllister, a former Magdalene inmate who came to work for her family in 1964, was also recorded by Lelia Doolan. She recounted how Lily and a friend walked out of the laundry and were given shelter by a Mrs Kelly on the docks.

The laundry buildings were demolished in 1991, and the booklet notes that the burial grounds of the nuns and of the Magdalene women appear to have been segregated, with new headstones erected to replace earlier grave monuments in 2010 as part of a “tidying exercise” by the Mercy order.

The research by historian Dr Paul MacCotter notes that interment dates on headstones do not always match dates of death on death certificates. The most common cause of death given was phthisis, or pulmonary tuberculosis.

The organisation has received planning permission to transform the former convent and the new building will be named “Módh Eile”, the Irish for “another way”. It is hoped that the €4 million project will be completed late next year.

Mr Tierney notes that even though the then government issued a public apology to the Magdalene women in 2013, “ there is a feeling the government is walking back”, and the recompense scheme is “suffering from some of the same problems as the running of the laundries” with “hierarchical and institutional” factors taking precedence over individuals.