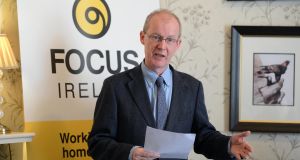 Mike Allen, head of advocacy with Focus Ireland, said 20 to 25 families a week in Dublin were becoming homeless for reasons including that the landlord was selling or the property was being repossessed. File photograph: Eric Luke/ The Irish Times

Over half of homeless families looking for a home in the private rented sector got no reply from landlords when they said they were dependent on the Housing Assistance Payment (HAP), a study has found.

Some 93 per cent of families surveyed by Focus Ireland described “looking for accommodation with HAP as a very stressful/difficult experience” with many finding it “demoralising, negative and depressing”.

Almost half said landlords were unwilling to accept HAP and almost a fifth reported prejudice due to skin colour, being a Traveller family, being a one-parent family or being homeless.

The study, Family Homelessness in Dublin: Causes, Housing Histories and Finding a Home, draws on detailed interviews with 237 families in January and February 2019 about their experiences of becoming homeless and of attempting to exit.

“Families in private rented accommodation continue to bear the brunt of the homelessness crisis,” says the report, with seven out of ten families saying their last secure home had been in the private-rented sector. The vast majority of these had had stable tenancies until they lost them.

In this survey over half (56 per cent, or 167) had come directly from the sector with 30 per cent (89) because the landlord was selling, moving back in, moving own family in or because the property was being repossessed.

Mike Allen, head of advocacy with Focus Ireland, said 20 to 25 families a week in Dublin were becoming homeless for these reasons and nothing was being done by Government to address this - “particularly the relationship between landlords [in arrears on their mortgage] and their banks” where the landlord is pressurised by their bank to sell the rental-property.

“If there was one area that we could make a difference it would be to stop those 20 to 25 families a month becoming homeless,” he said.

Some 30 per cent (89) of the families were homeless due to family circumstances like overcrowding or relationship breakdown, though a portion of these had been in the private sector before moving back with family to avoid homelessness.

A small proportion (16 per cent, 39) had precarious or chaotic housing histories, and may have been homeless before.

There was “great concern” said Mr Allen that these families were “getting lost” due to the pressure on services to move families out of homelessness to keep numbers recorded as exiting, in monthly statistics, as a high as possible.

“Inevitably the people who are left behind are the people who need the greatest support . . .What happens over a period of time is that stock of families who are homeless will increasingly be a higher and higher percentage who have bigger problems. . . and whose children will spend a long, long time in homelessness.”

Of the 237 families surveyed 20 per cent (47) had no experience of looking for housing using the HAP. Two thirds of these (31) did not want a home in the private rented sector because they saw it as insecure housing. Seven families did not answer questions on their use of HAP.