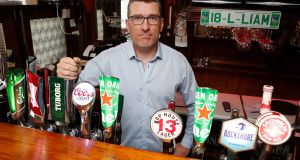 Wet pubs in Limerick city walked a tightrope Monday as they tentatively opened for the first time in six months.

Pubs not serving food around the country, excluding Dublin, reopened their doors for the first time on Monday since the mid-March lockdown.

Limerick pub owners remain on alert of potentially having to close their doors again, should there be a resurgence in coronavirus cases. Two weeks ago the city and county teetered on the edge of Level 3 restrictions, however numbers of cases have begun to ease somewhat.

“We’re kind of relieved to be getting back to business, but at the same time were a bit apprehensive,” said Aengus D’Arcy, owner of JJ Bowles pub, regarded as the city’s oldest pub.

Mr D’Arcy has reduced capacity from around 100 “to about 40-50”, which “will change the whole atmosphere”.

“It’s kind of good news for Limerick at the moment, but that could change very quickly for the worse for us,” he said.

For the first time since the riverside pub opened in 1794 customers must wear masks entering the premise and while walking to the toilets or smoking area.

Despite the restrictions, Mr D’Arcy remained upbeat, and “looking froward to a bit of craic again”.

Mike McMahon, who runs Mother Mac’s, on the opposite side of the River Shannon, said he’d invested “up to €30,000” on making the premises Covid-friendly.

After opening the doors at 10.30am, trade was “slow but steady”.

“We are moving dirty air out of the premises and clean air in in a more efficient manner,” he said.

“If I am asked to close again, I will do it without question.”

Donal Mulcahy, proprietor of Nancy Blakes, and Tom Collins bar, was thrilled to be open again.

“It’s fantastic, and it’s great to see some of our oldest regulars coming straight back into us,” he said beaming.

Mr Mulcahy said he hoped to start booking live music acts in the near future but acknowledged the reopening could be short-lived.

“There’s a possibility we could close again. If we got 24-48 hours (out of this) we’d be locking up and coming back in six months time, but I have to be positive — I wouldn’t have opened today if I wasn’t.”

Court not swayed by street preacher’s ode to Jesus