‘Our work shouldn’t just be for English speaking people, everyone in Ireland should be educated about water safety’ 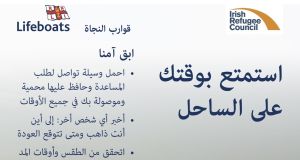 RNLI Lifeboats and the Irish Refugee Council have partnered up to spread the water safety message through different languages to Ireland’s immigrant community.

A multilingual water safety campaign has launched this summer as part of efforts to ensure Ireland’s growing immigrant community is fully aware of the dangers associated with swimming in open waters.

RNLI Lifeboats has partnered with the Irish Refugee Council (IRC) to print posters with messaging in a number of languages about how to stay safe on beaches and to teach swimmers about rip currents and tides on Irish coasts.

The decision to translate water safety advice follows two incidents during the summer – on the same day in June a father and his daughter got into trouble on an inflatable raft off the coast of Donegal and a group of men without life-jackets drifted out from Clonea beach in Waterford on another inflatable.

When RNLI water safety delivery support officer Lisa Hollingum was informed of the two incidents involving Arabic speakers she decided a more concentrated effort was needed to get the word out. She contacted the IRC who agreed to help translate the messaging and disperse the posters through their networks.

“We didn’t just print off a whole load of posters and hope they’d be picked up, we wanted to do targeted promotion. The landscape of Ireland is so vast now, we have people from across the world living here. Our work shouldn’t just be for English speaking people, everyone in Ireland should be educated about water safety.”

People who have moved to Ireland from countries that are landlocked may not have experience of tidal waters or rip currents, she warned.

“On a hot, sunny day, the water never looks threatening but the rip currents are always there. There are always hidden dangers.”

With no data available on the nationalities and languages spoken by people rescued by the RNLI, it can be difficult to build an accurate picture of exactly who is swimming off Irish coasts, said Ms Hollingum. However, based on the incidents from this summer, the first translation was done through Arabic and the IRC is now working to gather information on what other languages the safety message should be disseminated through, she added.

“As an organisation we’re trying to target at risk groups but we’re going in a bit blind. It’s a challenge but we need to find out who these people are. Ideally we’d like some of them to become part of the RNLI as it would be a way of getting the message out to a more diverse group.”

Ms Hollingum urged all swimmers to continue to take care through the autumn and to beware of cold water shock when swimming. Swimmers should not use inflatables, always have a means to call for help and contact 999 or 112 if they do get into distress, she said.

IRC chief executive Nick Henderson said he hoped the poster translations would be the beginning of a wider partnership to ensure safety messages are spread to all immigrant communities in Ireland.

“Initiatives like the Covid World Service (established to spread Covid health messaging) have demonstrated the importance of communicating to people in their own languages on emergency and health issues,” he said.