Uileann piper ‘bristled’ at being called a purist, funeral told 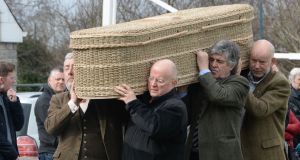 Musicians Neil Martin and Christy Moore were among those to carry the coffin of uilleann piper Liam O’Flynn at his funeral in Kill, Co Kildare. . Photograph: Alan Betson 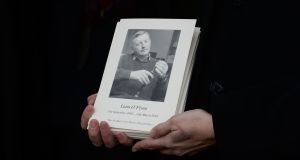 “His work with Seamus Heaney, The Poet and The Piper, The Given Note; when they came together it would quite simply cut you to the marrow,” he said.

“Two musicians that Liam knew and loved, Seamus Ennis and John Kelly, they had a great word they used to use in relation to people who were special - ‘magic’. Liam was a magic person,” Glackin said on Friday in St Brigid’s Church, Kill, Co Kildare, at the funeral service for O’ Flynn (72) who died last Wednesday.

Glackin said he “first encountered that magic back in 1967” at a Comhaltas session in Clontarf, where O’Flynn played with fellow uileann piper Leo Rowsome. This man “in a black pin striped suit came in accompanied by a young man who was, as our mothers would have said, very well turned out”. It was “master and pupil playing” and it was “magical”.

There was a 1972 concert at UCD. “Four guys came on the stage Liam, Donal (Lunny). Christy (Moore), and Andy (Irvine)” who “gave a performance which from the first note of a tune like Jenny’s Wedding... raised the roof off Belfield.”

His abiding feeling from that night “was a wonderful pride in the music these lads had given to my generation”. It “validated what I was doing as a musician as well”.

He recalled how “a term Liam absolutely bristled at was ‘purist’ because he understood there was nothing wrong with things being right. But he was never constrained. He was a musical adventurer” best illustrated when, with Shaun Davey, he embarked on The Brendan Voyage.

Earlier, welcoming everyone, parish priest Fr Willie O’Byrne said O’Flynn had “returned to his roots here in Kill, where he was born and reared”.

He spoke of a conversation with O’Flynn’s wife Jane in recent days. “I said to her, ‘Was it the music that brought ye together?’ And she said: ‘No way. It was the horses.” They had “28 great years together and I know that she was his rock,” he said.

The wicker coffin was carried in, as it would leave the church later, by members of O’Flynn’s family and friends including Paddy Glackin, Christy Moore, Seán Keane, and Padraigh MacMathúna.

The first reading was by Iarla Ó Lionáird who also sang, as did Brendan Begley.

O’Flynn’s nephew Olaf Vise played Seán O’Dhuibhir A’ Gleanna, a tune he promised to play for his uncle the next time they met. “ I said to Liam, look when I’m back in Ireland again I’m going to bring th’oul whistle and we’ll play a few tunes and I’d love to play Seán O’Dhuibhir for you. And he said ‘that’d be lovely, I’d love that’, and he smiled.”

A string quartet with Mark Redmond on uileann pipes played an excerpt from The Brendan Voyage and Christy Moore sang the Cliffs of Dooneen, joined in the final chorus by everyone.

The service ended with a rendition of Mo Ghile Mear.