Some 157 babies due in Ireland today with more than 60,000 due to arrive in India 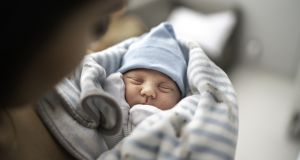 The 157 babies due to be born in Ireland on January 1st will have an average life expectancy of 105.6 years based on data from last year’s United Nations World Population Prospects which tracks worldwide population growth and ageing. Photograph: iStock

Irish babies born on January 1st, 2021 are expected to live to 105 years of age, according to Unicef estimates published this morning.

The 157 babies due to be born in Ireland on January 1st will have an average life expectancy of 105.6 years based on data from last year’s United Nations World Population Prospects which tracks worldwide population growth and ageing.

The more than 1,700 babies born today in the Central African Republic and Chad are expected to live until 61 years of age – the world’s lowest life expectancy for children born today, according to the UN data.

Egypt, Bangladesh and the Democratic Republic of Congo will also welcome between 8,500-9,500 new babies each on the first day of the year.

The first baby to be born in 2021 will be welcomed on the Pacific island of Fiji with the last birth for January 1st, 2021 taking place in the United States.

Chief Executive of Unicef Ireland Peter Power noted that 2021 would be “a critical year for children” and called on nations to renew their commitments to supporting “the young lives who will inherit the world we leave”. The year 2021 also marks the 75th anniversary of Unicef and its work supporting children worldwide with events planned through the year to mark the UN body’s work in protecting children from conflict, disease and exclusion and championing their right to survival, health and education, said Mr Power.

Data release to mark the 75 year anniversary shows John was the most popular baby name for boys born in countries with large Irish ex-pat populations around the time of Unicef’s foundation while Margaret and Mary were particularly popular in the US, Australia and Britain.

“This has been a difficult year for all of us, and there is perhaps no better way to turn the page than to welcome new young lives into the world,” said Mr Power. “With the challenges of 2020 behind us, and the opportunities of 2021 before us, now is the time to begin to build a better world. Children born today will inherit the world we begin to build for them today.”