Varadkar rows back on controversial plan to name all fraudsters

Only people found guilty of defrauding State of more than €5,000 will be named 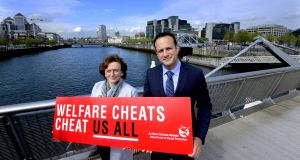 Leo Varadkar at the launch in Dublin of his campaign against welfare fraud, in April 2017. File photograph: Cyril Byrne/The Irish Times

Taoiseach Leo Varadkar has rowed back on controversial plans he announced when he was minister for social protection to name and shame all welfare fraudsters.

Under a compromise deal reached with Fianna Fáil, only people found guilty of defrauding the State of welfare payments in excess of €5,000 will be named in a tax defaulters’ style public register.

Minister for Employment and Social Protection Regina Doherty will this week publish an amended version of measures championed by Mr Varadkar to clamp down on welfare fraud.

Before he became Taoiseach, Mr Varadkar wanted to publish a list of those convicted of any welfare fraud every three months. The plans drew a mixed response at the time and were released soon after a campaign he launched called: “Welfare cheats cheat us all”.

The anti-fraud campaign was promoted the month before the Fine Gael leadership race began and led to an almost 50 per cent increase in tip-offs of suspicions of welfare fraud. Ms Doherty said 4,859 reports had been received from members of the public since the campaign launched, compared with 3,322 reports over the same period in 2016.

The Cabinet on Wednesday agreed an amendment to Mr Varadkar’s initial proposal which will increase the threshold at which people will have their names publicised. Modelled on the publication of lists of tax defaulters, the proposals seek to introduce a new system whereby anyone who is caught defrauding the State of welfare payments in excess of €5,000 will have their names publicised.

Ms Doherty made the change after speaking to her Fianna Fáil counterpart, Willie O’Dea, who said it was unacceptable that people who had been caught defrauding the State of very small amounts would have their name publicised.

Government sources sought to cast the agreement with the main Opposition party as the latest example of the minority administration and Fianna Fáil working together after conflicts, such as over the appointment of former attorney general Máire Whelan to the Court of Appeal.

Agreement was also reached earlier this week on a new system of waste charges, paving the way for a pay-by-weight regime to be extended to all householders and for a new regulator to monitor pricing in the waste industry.

“It is the same as the waste stuff,” said a Government source. “The two parties sit down, talk to each other and then get on with it.”

The Government believes that all stages of the Social Welfare and Pensions Bill 2017 can be passed through the Dáil by the summer recess next week but Mr O’Dea has expressed serious concern about such a timeframe.

Mr O’Dea, a TD for Limerick, said the Bill deals with highly complex matters around defined benefit pensions. He said it should not be rushed and said he would object to it being passed through the Dáil before the summer recess begins next week, given the complexity of the issues involved.