Destruction of church an ‘act of persecution against all Christians’

Archbishop says vandalism in was onnemara motivated by anti-Christian sentiment’ 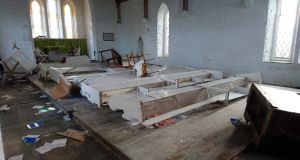 The ransacked Holy Trinity Church of Ireland church on the Errislannan peninsula in Connemara, Co Galway which was extensively damaged this week.

The Catholic Archbishop of Tuam Michael Neary has described the destruction in a Church of Ireland church in Connemara as “an act of persecution against all Christians”.

On the remote Errislannan peninsula in Connemara, about 85km from Galway city, the Holy Trinity church was extensively damaged by vandals with its interiors ruined, windows smashed, electrics ripped out of the walls, and the pulpit, pews and organ all destroyed. The damage came to light on Wednesday.

“Over the last 12 months there has been high profile media coverage of the desecration of Christian churches in Iraq and in the Philippines. These actions are a physical threat to worshipping Christians anywhere in the world,” Archbishop Neary said.

“The violent images of the devastation in the Holy Trinity Church in Errislannan are distressing: the Holy Bible thrown out the window; the Cross being used as a weapon to smash items; overturned and broken pews; damage to the altar; the pulpit; the organ; and the lights ripped out.

“This damage is not just a criminal act: rather it is an act motivated by anti-Christian sentiment and is a challenge to freedom of religious expression in Ireland today.

“Religious freedom is at the heart of human rights and not without cost. In too many countries, places of worship are being destroyed and people are being killed and persecuted for their religious beliefs,” he said.

“At this difficult time for the local congregation, I wish to offer my prayerful solidarity and extend my support to Bishop Patrick William Rooke, the Church of Ireland Bishop of Tuam, Killala and Anconry, and to Rev Stan Evans, for his bravery and perseverance in the wake of this threatening development.”

Rev Evans has said it would cost upwards of €70,000 to repair the damage at the church.

“This is the worst experience I have ever had during my ministry, it’s horrendous,” he said.

“It was absolutely stupid vandalism but when you look at it, it was calculated. Every pew was turned over and smashed. Everything that was special in the place has been completely desecrated.”

The Holy Trinity church has up to 30 regular parishioners and hosts evening services during July and August.