Event told ‘not right that we have over 100,000 children still living in poverty in Ireland’ 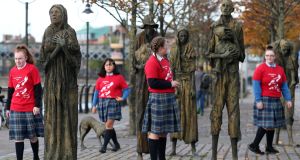 Yemi has three children, aged six, four and three. All were born in direct provision.

“In the beginning they said people would live in direct provision for no more than six months but we have been there for six years,” she said, speaking at an event in Dublin to mark UN International Day for the Eradication of Poverty.

“My children were all born in Ireland and have spent their entire lives in direct provision, the only home they know but it’s not a home. We can’t cook for ourselves so my children have never seen me make a meal for them. We share one room. My children can’t invite friends home.”

She said she was certain “direct provision is damaging people like me and my children”.

“Living in direct provision is terrifying because we don’t know what life is for you. One day you can wake up and find a letter from the Government saying that you are being sent back to the country you ran away from.”

Yemi’s story was one of several personal testimonies given by people who had first-hand experience of poverty at a ceremony at Dublin’s Human Rights and Poverty Stone, near the Famine Memorial, on Dublin’s Custom House Quay.

This year marks the 30th anniversary of the UN Convention on the Rights of the Child. And the theme of the UN anti-poverty day on Thursday was acting together to empower children, their families and communities to end poverty.

Among those attending the event – in which local schoolchildren sang – were Dublin’s deputy lord mayor Tom Brabazon, French ambassador to Ireland Stéphane Crouzat and former Irish ambassador to the UN David Donoghue.

Mr Donoghue co-chaired the intergovernmental negotiations which led to the adoption of the ground-breaking 2030 agenda for sustainable development in September 2015.

Testimony was also given at the event by a former drug user who is now an anti-poverty campaigner. Lorraine Kelly spoke about “feeling unworthy of anything in life” but “four years ago I walked into a recovery home” and her life was transformed.

Nadia, a separated mother of two from the Philippines – who like most of those who testified gave only her first name to protect her anonymity – told the crowd “I have always struggled to provide for my daughters”.

‘No child shall suffer’

Many Filipino women “even though they are well educated . . . are willing to sacrifice prestige and their self-esteem in order to provide for their families. As a domestic worker, not all employers treat you well. It is hard.”

Saoirse Brady of the Children’s Rights Alliance recalled how 100 years ago the first Dáil declared that “no child shall suffer from lack of food, clothing, or shelter”. Yet, today it was “simply not right that we have over 100,000 children still living in poverty in Ireland”.

Welcoming “some small first steps” in last week’s budget aimed at addressing child poverty, she said “we know that they are not enough”. More must be done particularly for “the almost 4,000 children with nowhere to call home”, she said.

Michael Kilbride, of Altogether in Dignity Ireland, believed that in the context of eliminating poverty there should be a national day to remember the Famine during the school year.

“It should involve every primary school and secondary school and be promoted through the President’s office so that we don’t forget what happened to us and by doing that we’re encouraging the children. We will also remember the poverty that’s in Ireland today, those who are left behind ,” he said.