‘Homelessness is not something you plan for... It is about survival’

In Galway, one charity is helping rough sleepers who opt not to use emergency beds

Over 80 students, teachers and past pupils of Belvedere College will be sleeping out in Dublin’s inner city to raise funds for Focus Ireland, Peter McVerry Trust and HomeAgain. 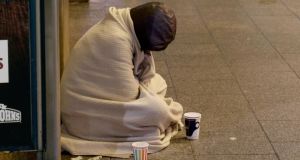 For nigh on four winters, one man has slept under the stars, exposed to all the elements on Galway city’s coastal rim.

Living on the edge in every sense, he has survived storm-force winds, including Ophelia, and sub-zero temperatures and torrents of rain under a tiny tarpaulin. Latterly, he has switched to using a tent.

In spite of many attempts, he has declined offers of cold weather comfort offered by several of the city’s homeless agencies.

The man is one of 25 regular rough sleepers in Galway, as in men, and some women, who do not want to take up the offer of an emergency bed.

Every couple of weeks, Cope Galway homelessness resource worker Dave Byrne sets out before dawn to check on the welfare of those he can find, and to remind them that the agency’s day centre will offer them breakfast, showers, and somewhere to charge their phones.

On one such early morning outing this month, Byrne and assistant Sinead Hynes explain the purpose of their circuit. Hynes, who lives in Moycullen, is one of a number of volunteers who rises early to offer assistance before going to work.

“Under the Government’s cold weather response, both Cope and Galway Simon have a total of 31 beds to offer as emergency accommodation, but not everyone wants to take this up,” Byrne says.

“There are many different reasons, but we give out sleeping bags in that case – offering a clean one in exchange of a used one – and that way we have an estimate of who is sleeping out.”

On this particular morning, which is unusually mild after a severe cold spell, there are only a handful of people in doorways in the Shop Street area. One woman is awake, another man is fast asleep. Byrne and Hynes check on his welfare discreetly and then leave a small bag, with a map to Cope’s day centre on Seamus Quirke Road, where breakfast is being prepared.

Even as we move up the street, a man in his late 30s confronts Byrne, looking for cigarettes. A truck delivery driver has already had an aggressive encounter with the same individual minutes before, and seems visibly shocked.

“We don’t engage in a situation like that, but this man’s arrival yesterday may have intimidated regular sleepers, and that may be why we aren’t seeing so many now,” Byrne says.

Close to an alleyway by the city library, there is a glimpse of a Cope-issued sleeping bag – colour coded pink. A cardboard box has been carefully constructed into a type of cot. The sound sleeper does not move, and Byrne makes a brief inquiry and then leaves another bag.

“So you will find some shops have woken people sheltering in doorways, and they will have made their way to the day centre already,” Byrne explains, as he puts in a call to find out how many sleeping bags were given out the night before.

Like many cities in Ireland, Galway is experiencing a housing crisis, and Cope Galway is working with up to 55 families, including about 150 children.

“Social housing allocations have increased in the past 18 months, but not at the pace required to reduce a waiting list of over 3,500 – some 54 per cent being single-person households,” says Martin O’Connor, Cope Galway assistant chief executive.

“Access to local authority land is an issue holding up social housing provision, with the plan for the city bypass being one contributing factor, and so we are expending a lot of energy in treating the symptoms of the overall housing crisis,” O’Connor says.

The situation of individuals requires a “more radical solution” than just a roof over a head, he says. “These are often single people or people who have split up with families, and they have been squeezed out of poorer accommodation by the overall demand.

Mick Mackey (64), from the Claddagh, understands why the man out in his tent on the coast, and the two dozen other rough sleepers, refuse a bed. He lived for 20 years on the streets, often sleeping under two boats near his home.

“Several siblings died, my mother died of a brain tumour, and I left home because of my drinking,” Mackey says.

It was encouragement from a psychiatric nurse who was working with Galway Simon that gave him the resolve.

“I think I was ready to listen and he had the right words, and I didn’t try to give up smoking and drinking at the same time,” Mackey explains. “In all the times I had been discharged from psychiatric hospital, the doctors never asked me where I was sleeping that night. This man, a nurse, was different, as he cared.

“I lived with people in the streets who had lost all trust in society, and that’s why the homeless crisis is not about housing but about wider issues such as health,” he says.

“Vulnerable people have to have regular access to mental health services, all the supports, and that way they gain the confidence to begin living again. “Homelessness is not something you plan for. You don’t pack your suitcase for it, and then it happens and it is about survival.

“No one knows what some of these people – whether Irish or migrants – went through or where they came from, and I think there is more understanding in society of that now,” Mackey says.

“So the Government departments – housing, health and education – have to sit around the table with the agencies, but also with homeless people, and deal with it as the crisis that Fr Peter McVerry keeps saying it is...”.