Moratorium on evictions would stop growth of homelessness

Pause would give State more time to build new housing 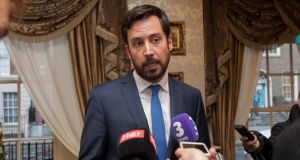 A familiar sight in the streets of some areas of Dublin is the estate agent’s sign which proclaims: “Period building. Suitable for family home . Currently in 11 units.” It’s a great thing to see young couples taking over such buildings and gutting them, replacing the plastic window frames, replanting the gardens, and after a year of sweat and tears, moving in with their growing young families.

It’s a very civilised activity. But I am constantly reminded of the saying by Walter Benjamin that there is no document of civilisation which is not at the same time a document of barbarism. The barbarism here is that each new family home means 11 families or individuals are now looking for alternative accommodation which doesn’t exist.

Don’t get me wrong, I’m not against reclaiming period residences which were broken up into miserable bedsits by unscrupulous landlords, of the type highlighted in the media in recent months. In fact, I have done it myself. However, I did it in another country and there’s the rub. The tenants I evicted had been provided with suitable new homes, which was a condition of the eviction. Not only that, I had to pay a hefty fee to the local council for every unit I removed from the housing stock, on the basis that if I removed a unit, it was only fair that I make a serious contribution to replacing it.

Many of these decrepit period houses, of course, do seriously need renovating. One such eyesore building in my neighbourhood was, incredibly, divided into 17 units. I would occasionally stop to chat to the landlord, who was sometimes to be found loitering outside the building. He was a country man in his 80s, always willing to share his business acumen. “People used to say I was mad for not selling, sure I could have been rich. But look at me now. Amn’t I getting a €100,000 a year out of the place, regular as clockwork from the social welfare?”

It was clear that he hadn’t spent a penny on the building for years. But why would he? In a bizarre echo of the Irish tenant’s conundrum of the 19th century, he had no financial interest in improvement, as the allowance paid by social protection would go neither up nor down, whatever the state of the property.

I once had occasion to enter the building, and was shocked by the squalor and neglect inside. I contacted a council housing official. He told me, off the record of course, that they had the legal powers to close down buildings like this - but if they did, in the real world, there would be no place for the tenants to go. This was some years before the current homelessness crisis so, once again, no one can say it was unexpected or unplanned. Because not planning is in itself a kind of planning. Not planning to house people is planning to make them homeless.

So here is a modest proposal. Much homelessness (including the less visible homelessness of people living with their families) comes as a result of people being evicted from their homes. As we know, there are some welcome new restrictions on landlords’ ability to evict people. But do they go far enough? Minister for Housing Eoghan Murphy, mindful of the interests of property owners, obviously thinks they do. But one other possibility would be to make it illegal to evict a tenant until he had been offered or had found alternative accommodation. While this is the ideal situation, there is no point in having such a rule in Ireland at the moment, because no alternative accommodation is available. A hotel room is not accommodation. So it would be impossible to enforce.

But a very obvious solution presents itself, even if it is a temporary one. We are in a crisis. The homelessness problem is desperate, and requires desperate remedies. So why not a moratorium on all evictions, for any reason, of any type, for the next 12 months? This would stop the growth of homelessness, and would give the State more time to build new housing, either on its own or in public/private partnership. If there hasn’t been any improvement after a year, it could be extended. Not only would it halt to some extent the growth of homelessness, it could reduce the psychological stress caused by fear of homelessness in those people who are at all times no more than a month or two away from it.

Of course, the Government would oppose a proposal like this on ideological grounds, as interfering with the sacred right of property. The Minister, or perhaps some hapless Minister of State, would be sent out to do a Fr Jack around the radio and television studios, endlessly repeating, in response to every question, that “that would be a constitutional matter”.

It is clear that the homeless and future homeless are not a constituency which, although they get up very early in the morning, will ever vote Fine Gael. But there are also good landlords, decent people who might have legitimate plans for their properties and need to evict people, who would start to put pressure on the Government to do something about the situation. It would be in their interests to do so, and maybe the Government would listen to them.

It doesn’t seem to be listening to anyone else.