Volunteers at the Capuchin Day Centre in Dublin 7 give out 2,500 Christmas food hampers to people in need. Last year they distributed 2,200. 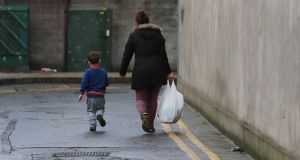 Some of those who attended the Capuchin Day Centre on Friday morning leaving with a food hamper. Photograph Nick Bradshaw.

The Capuchin day centre will give out “threefold” the number of Christmas food parcels this year as it did five years ago, while the number of children presenting for free food has “doubled... since the economy picked up” .

Manager Alan Bailey was speaking on Friday morning as thousands arrived at the centre on Dublin’s Bow street to collect the parcels of fresh and dry food for the Christmas period. When doors opened at 8 am some 300 people were waiting. By 10 am over 900 parcels had been collected, while 2,600 parcels would be given out during the day.

Among the steady flow were mothers, fathers, young children, middle-aged and young adults, elderly people, Irish, non-national, Traveller and Roma, people in wheelchairs and on crutches.

Siobhán Kelly, mother of three children aged 7, 4 and 2, has been homeless for “nearly three years”. Currently in a Focus Ireland-supported emergency accommodation in Finglas, she comes to the Capuchin centre “every Wednesday” for the weekly parcel of such basics as butter, tea, milk, sugar, canned vegetables and chicken.

Her friend Vivian Marsden, mother of children aged 2, 5 and 11, is in the same Focus Ireland centre, and has been homeless a number of times over the past seven years. “I come every week. I find it very good for the milk and the nappies. It’s a help. The recession over? It’s not over for the homeless, for my children. My 11 year-old is traumatised by what she’s going through.”

Asked what they will do on Christmas day, the women say they “cook a dinner together, make it as good as we can for the children”.

Joseph McMahon, from Pearse Street, a single man in his 40s, comes weekly for a food parcel. “I get €188 a week on the dole. I pay my rent - €32, my bills and maintenance for the kids. I’d be lucky to be left with €50 a week. Thank God for these people,” he says, gesturing to the staff at the centre.

Denis Sek, from Malaysia and now an Irish citizen, works “part-time in a restaurant”. This is the first time he has come for a Christmas food parcel. “The money in the restaurant is not too much. It’s okay for me. I am single. I want to make it a better job.”

Joyce Keogh, in her 50s and from Kilmainham, used to work as a receptionist in a Dublin maternity hospital. The death of her brother, of her father and the breakdown of her marriage in quick succession, left her “utterly heartbroken”.

She has spent time homeless, living in a shed but now has “my own bungalow”. “This place is very important to me,” she says of the centre. “If you’re really tired, lonely, walking in the freezing cold and thinking, thinking, thinking..just to come here and sit, and talk to someone. It saves me.”

The centre, which also provides free meals daily, costs €3.6 million a year to run, of which €450,000 is provided by Government. The Christmas parcels cost €100,000 this year, said Mr Bailey.

“At the height of the recession we’d have had 800 people maximum for the Christmas parcels. This year it will be 2,600, a threefold increase.

“Since the economy picked up we have seen double the number of children. It saddens me it’s happening. The recession might be over but it’s not lifting everyone. In fact some are being pushed further down. Inequality is growing.”