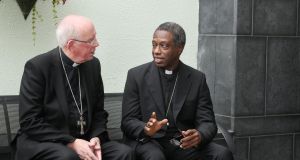 Also there to meet him were Bishop of Limerick Brendan Leahy, Bishop of Derry Donal McKeown, Bishop of Ardagh and Clonacnoise Francis Duffy, and Bishop of Kildare and Leighlin Denis Nulty, as well as staff at the nunciature in Dublin.

The Catholic primate Archbishop Eamon Martin is leading pilgrims from the  Armagh archdiocese on a visit to Fatima to mark the 100th anniversary of the apparition of Our Lady there.

From Nigeria, Archbishop Okolo (60) is the first African to be papal nuncio in Ireland. As is traditional, he becomes dean of the diplomatic corps while here. Ordained in 1983, he was a priest of the Nigerian diocese of Nnewi, where 13 people were shot dead while attending Mass at St Philip’s in Ozubulu on Sunday August 6th in a drugs related massacre.

Archbishop Okolo is a member of the Igbo people who, during the Nigerian civil war of 1967 to 1970, seceded as the short-lived Republic of Biafra.

Irish Spiritan (Holy Ghost) missionaries, particularly the late Fr Jack and Fr Gus Finucane, played a major role in helping the beleaguered Igbo at the time through food aid as attempts were made to starve them into submission.

Such efforts led to the establishment of Ireland’s largest humanitarian agency, Concern.

Following training with the Vatican’s diplomatic service Archbishop Okolo’s first assignment in June 1990 was to Sri Lanka. Since when he has served in Haiti, the Antillean Islands (including Trinidad & Tobago, Barbados, Saint Lucia, the Bahamas and Jamaica), Switzerland, the Czech Republic and Australia.