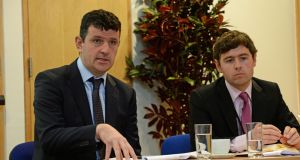 Prof Kieran McQuinn and Dr Conor O’Toole of the ESRI speaking at an event last year. On Tuesday, they addressed the Oireachtas housing committee.

The Republic will face “significant challenges” in the building of houses in the event of a hard Brexit due to its heavy reliance on the United Kingdom for imports of construction materials and fossil fuels, two influential think tanks have said.

Dr Conor O’Toole, a senior research officer with the ESRI, said the degree of disruption that would result from a hard Brexit was “very hard to know” as it will depend on “whatever tariff situation comes to pass”.

However, the economic and logistical impacts on trade are likely to be felt acutely in the construction sector as 43 per cent of total prefabricated, electrical, and plumbing imports came from the UK in 2017. “It’s quite a lot of reliance,” said Dr O’Toole.

“Also, if construction firms face difficulty raising capital, that could be a particular restraint in their ability to deliver units,” he continued. “On the mortgage market, if the banking sector is hit with financial stability risks, they may lend less.”

NERI director Dr Tom Healy said 85 per cent of the Republic’s fossil fuel imports come from the UK, and the State must look to reduce this reliance much quicker than previously thought.

“We need to get our fossil fuel import dependency rate down to something much lower because we are very vulnerable,” he said. “We need to look to native sources of renewable energy to replace that dependence on external sources.”

Dr Healy said the impact of that would be greater in rural areas which are already facing “significant challenges”.

“There is a dependence on cars to get to and from shops and workplaces,” he said. “Brexit is all the more reason why we need to invest in public transport. We need to reinvest in re-skilling because some workers are going to lose jobs one way or another.”

ESRI research professor Kieran McQuinn said another issue was the potential for “increased friction” in the relationship between the Irish and UK labour markets. “By friction we mean anything which prevents people from moving and working in one jurisdiction to another,” he said.

“Traditionally, the UK labour market has operated as a form of safety valve for the Irish economy. When unemployment starts to increase significantly in the domestic economy, people tend to move to the UK to find employment.

“If this becomes harder to do as a result of Brexit then it will increase the scale of negative shocks in the Irish economy. Therefore, housing demand will experience greater fluctuations than would otherwise be the case.”

However, Prof McQuinn said housing demand would likely reduce after Brexit due to a reduction in income levels and higher unemployment.

Furthermore, he said the impact on the economy “may reduce” the number of people coming to work here. “This, again, would reduce the demand for housing and hence, result in lower house price growth relative to a baseline, no Brexit case,” he said.

“On the other hand, Brexit could result in a large number of people moving to Ireland from the UK, particularly if there is a significant fall-out for the financial sector in London.

“This could see an increase in the number of people coming to live and work, particularly in Dublin, which would increase housing demand. Therefore, one could see significant regional differences in the impact of Brexit on the Irish housing market.”

1 Republic’s Coronavirus death toll rises by 28 as confirmed cases up by 500
2 Consultants sent to Cavan hospital after 70 medics infected with coronavirus
3 Threatening posters in Co Clare tell holiday home owners to ‘f**k off’
4 Coronavirus: Simon Harris expects restrictions to stay in place for weeks
5 This time, the future of the euro really is at stake
Real news has value SUBSCRIBE