Grand Hotel in Wicklow to be used as direct provision centre

Facility to start accommodating about 100 asylum-seekers within weeks 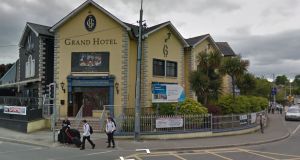 The Grand Hotel in Wicklow town is to be used as a direct provision centre for about 100 asylum-seekers, the Department of Justice has said.

A spokesman for the department said “there will be approximately 100 persons who are seeking international protection residency at the Grand Hotel and we expect it to be operational in the next couple of weeks”.

The direct provision system is operating at near full capacity, and in recent months has struggled to accommodate new asylum-seekers entering Ireland.

In September the RIA was unable to house 20 people, and was forced to refer the asylum-seekers to homelessness services.

At the end of October, there were 5,848 people living across 34 direct provision centres, with 60 spaces available for new applicants. Some 620 people living in centres have status to remain in Ireland, but have been unable to move out of the system due to difficulties securing housing.

Last month, residents at Clondalkin Towers Hotel were informed the centre would close on December 3rd. Clondalkin Towers, the largest direct provision centre in Dublin, houses more than 200 asylum-seekers. However, a department spokesman said the contract with the provider to run the centre had been extended “on humanitarian grounds” to summer 2019.

Plans are under way to turn the old Shannon Key West Hotel into a refugee centre in the small village of Rooskey, on the Roscommon-Leitrim border.

Nick Henderson, chief executive of the Irish Refugee Council, said the decision to use the Grand Hotel in Wicklow as a centre “may add short term capacity” to the system.

Mr Henderson said, however, that as the arrangement had been put in place “quite quickly”, it was doubtful residents would be provided with facilities to cook for themselves.

Any initial concerns among local communities regarding direct provision centres opening would be “allayed”, he said.

“Our long-standing experience is that people seeking asylum in Ireland have repeatedly shown that they become vital parts of local communities once given the opportunity,” he said.