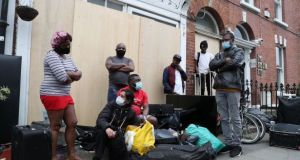 In August, nine tenants were evicted from a property on Berkeley Road, Phibsborough, north Dublin, as men clad in black repossessed the house. The tenants claimed they had not received an eviction notice. File photograph: Nick Bradshaw

More than 370 tenants have been served eviction notices to leave their accommodation by landlords since the start of the coronavirus pandemic, with an increase in complaints over illegal evictions in recent weeks.

Between March and the end of June the Residential Tenancies Board (RTB) was informed of 374 cases where landlords served eviction notices to tenants, according to figures provided to The Irish Times.

The board was informed of 243 notices of termination in March, as the first wave of the coronavirus pandemic began to hit the country and the Government imposed a national lockdown.

A further 131 notices of termination were notified to the board by landlords between April and the end of June, despite the Government introducing an emergency ban on evictions and a freeze on rent increases in late March.

The blanket moratorium on evictions expired at the start of August, but the protections were extended until January 2021 for tenants unable to pay their rent due to the Covid-19 crisis.

The board adjudicates in disputes between landlords and tenants. Since the blanket ban on evictions was lifted the regulator has received 81 complaints from tenants over alleged illegal evictions between August 2nd and September 17th.

Some 139 further disputes have been lodged with the board by tenants challenging the validity of eviction notices. There have been 150 complaints lodged by landlords against tenants over rent arrears during the same period.

Between April and June there were 93 disputes lodged with the board by tenants over alleged illegal evictions.

A spokeswoman for the board said the unlawful termination of tenancies was a “significant concern” for the State body during the pandemic.

“Since March 2020, the RTB has been receiving on average 6-7 calls a week in relation to unlawful termination of tenancies and prioritises progressing these applications. In the majority of these cases the RTB collaborates with both landlord and tenant to reinstate the tenancy, pending the outcome of dispute resolution,” said the spokeswoman.

If a landlord is found to have illegally evicted tenants they can be fined up to €20,000 by the regulator, who can also seek a court injunction to reinstate the tenants in the property.

Some 44 tenants had contacted the organisation after being illegally evicted from their housing since March, of which 17 had ended up in homeless accommodation, or sleeping in cars, he said.

The Garda are expected shortly to issue new policy guidance to gardaí about their role at evictions.

In August, nine tenants were evicted from a property on Berkeley Road, Phibsborough, north Dublin, as a number of men clad in black repossessed the house. The tenants claimed they had not received an eviction notice.

Gardaí were present at the eviction but did not intervene as one of the tenants was physically removed from the home, according to video footage. Civil liberties groups and Opposition politicians criticised the actions of gardaí present.

A new policy document for gardaí on how to approach policing such circumstances is “near completion,” said a Garda source.

Following assistance from several housing activists the tenants regained entry into the north Dublin property the following day and remain in situ. One of the tenants, Elias Niyi Adbo Jegede, said they had not received any correspondence from the owners of the property since re-entering the house.